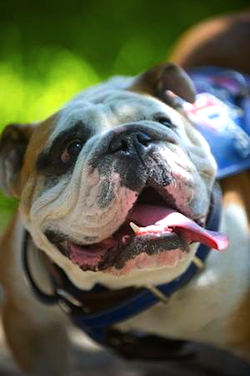 Tuesday, Louisiana Tech offered a $2,000 reward for the safe return of its live, four-year-old English bulldog mascot, Tech XX, who had reportedly disappeared from the Ruston, La., animal clinic where he stays on Sunday night. Today, it canceled the bounty with word that Tech XX was not missing, but in fact had been dead for several days of heat stroke – the result of being left outside too long by a clinic worker who finally admitted to covering up the death on Wednesday morning.

Per a statement released by the veterinarian who owns the clinic:

Regretfully, I learned this morning that through negligence of an employee, Tech XX was left outside too long on Sunday evening and passed away from a heat stroke. That employee unfortunately chose to handle it the wrong way and attempted to cover it up. Due to this negligence, the employee is no longer employed by the Sexton Animal Health Center.

My family, my staff and I are extremely upset at this tragic turn of events as I know the entire Louisiana Tech Family is as well. Tech XX was a memeber of our immediate family and a daily part of our lives for the past four years. We are devstated over the circumstances of his passing and there will be a large void in our hearts for some time to come. As with any family member, we will spend considerable time grieving his passing.

Tech (not to be confused with Louisiana Tech's costumed bulldog mascot, "Champ") is the perennial title for the English bulldog serving as the Bulldogs' mascot at any given time, a tradition reportedly dating back to 1899. According to legend – it's always a legend – that was the year a stray bulldog saved five Tech students who had taken him in by waking them up just in time to escape a house fire. The dog died in the flames and smoke, but was honored accordingly when students chose a bulldog as the school mascot two years later. An incredible number of endearing dogs, inspirational eagles and other random beasts seem to have performed titanic feats on college campuses in these years, right around the time most schools happened to be selecting new symbols, but we have no reason to doubt it. Forged from the eternal spirit of heroes, these dogs.

As for this dog, Tech XX was selected for the role by a broker working through a local pet shop and introduced in 2008 as just a three-month-old pup. His predecessor, Tech XIX, lasted six years, but was retired in 2007 after surviving a bout of heat stroke during an early season game against Central Arkansas. (Poor guy. Laying it on the line for Central Arkansas?) XIX currently resides with a Tech engineering professor who is also an alum. Student government president Will Dearmon promised the Shreveport Times that there will be a Tech XXI, "but right now our hearts are broken."