In response to the ridicule that followed claims of conference championships in 1997 and 2010, the university has now appended the words "South Division" to signal to passersby that they do not actually count and should be ignored. 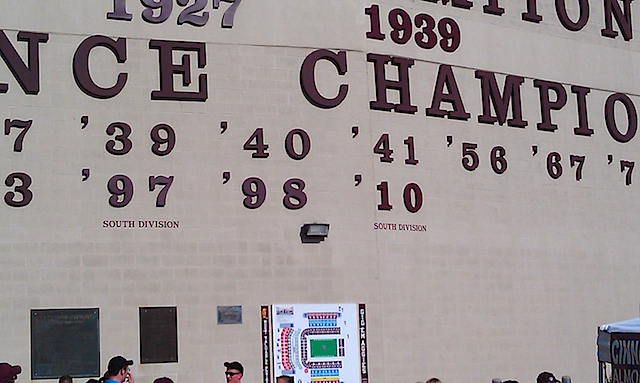 From the sounds of it, Texas A&M's Kyle Field is going to be undergoing a lot of big changes over the next few years as it's subjected to $450 million worth of updates, overhauls and expansions. But there was a much subtler change to the facade this weekend for fans who bothered to read the fine print.

As regular readers might recall, A&M decided at some point in the offseason to make some additions to its "Wall of Champions," which suddenly boasts a pair of national championships (from 1919 and 1927) that the school had never claimed before, as well as two new conference championships from 1997 and 2010. The latter struck some observers as especially odd, because most of them can actually remember the 1997 and 2010 seasons, and the fact that Texas A&M didn't win the Big 12 in either one of them: the '97 Aggies won the South Division but were crushed in the Big 12 Championship Game by the eventual national champion, Nebraska. The 2010 Aggies didn't even play for the title after finishing in a three-way tie for first place in the division.

A&M's only legitimate claim to a conference crown in the Big 12 era came in 1998, when it won the South and upset No. 1 Kansas State in the championship game.

In response to the ridicule that followed, the university has now appended the words "South Division" below the '97 and '10 claims on the wall to signal to passersby that they don't actually count and should be ignored. A fan who noticed the change during Saturday's game against Texas Southern sent in photos of the fine print to the website Deadspin.

More egregiously, there are still no clarifications, asterisks or other qualifiers next to the claims of national championships in 1919 and 1927, when no such honor existed. The first widely recognized national championship was awarded by the Associated Press in 1936; nearly all national championship claims prior to that year are citing obscure computer models that retroactively awarded the title several decades after the fact. (Alabama is especially adept at this.) In this case, the 1919 Aggies were later acknowledged as "national champions" by two "retroactive" selectors, the Billingsley Report and the National Championship Foundation; the 1927 team was retroactively honored by the Sagarin Ratings. This is all completely bogus, and it is almost certainly not going to stop anytime soon.