Mark Andrews was a popular mid-round target and breakout pick in drafts last August, but the Baltimore Ravens passing game took a step back and so did he in 2021. However, all of the reasons we loved Andrews heading into 2020 are basically still in play for 2021 and now you can grab him at a depressed ADP. If you buy into the idea that the Ravens adding receivers (Rashod Bateman, Sammy Watkins) will open up easier windows for Andrews, he could be an absolute steal at his ADP.

It's easy to get excited about Andrews, but more importantly than that, we want to keep you up to date with everything surrounding his 2021 profile. Below, we'll break down Andrews' outlook, changes in his ADP, where he's going in mock drafts, training camp/preseason updates and more.

Mark Andrews took a small step back in 2019, but he should still be drafted as top-five tight end in the first four rounds of your draft. Despite missing two weeks on the COVID-19 list, Andrews tied Marquise Brown for the team lead in receptions and was the only Raven besides Brown with more than 50 targets.

Andrews not only dominates targets in Baltimore, but he's been very efficient. His 8.9 yards per target ranks fifth amongst tight ends since he entered the league and his 8.5% touchdown rate trails only Jared Cook. The fact that he's still just 25 years old gives Andrews an argument for the top spot amongst tight ends in Dynasty. (Heath Cummings) 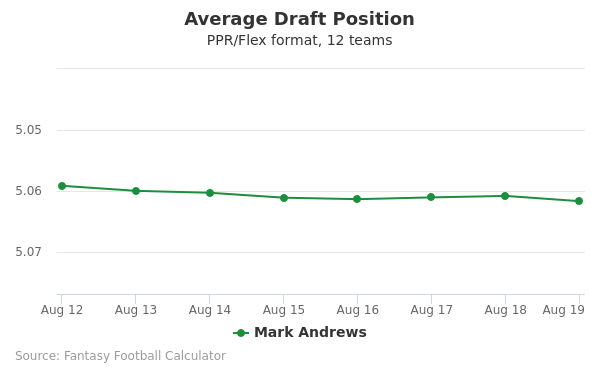 As you can see, Andrews' ADP has fallen a bit and this coincides with the rise in ADP of popular rookie breakout candidate Kyle Pitts. There just doesn't seem to be much buzz surrounding Andrews heading into 2021.