Read here why this feels so personal to Posey and his wife and also see the hats that are being sold.

Giants catcher Buster Posey is about as professionally accomplished as one can be, with the three World Series rings, a Rookie of the Year and an MVP. Off the field, though, he's starting an excellent philanthropic journey in conjunction with New Era.

Posey and his wife, Kristen, annonced their plans to make pediatric cancer their primary focus in charity work on Wednesday at a press conference in AT&T Park.

"Kristen and I have been blessed with two healthy kids and the opportunity to contribute to the community in a meaningful way," Posey said. "We were shocked to learn that only about four percent of cancer funds raised throughout the country are dedicated to pediatric cancer research, and we felt compelled to lend our voices to this important cause. Our hope is that by working with the doctors, patients and their families we can raise significant awareness and funds for pediatric cancer research and treatment."

The three pillars of their efforts are as follows, via a press release:

· Patient/Family Support: The Poseys and the Giants have established a program at the ballpark to support pediatric patients and their families receiving treatment at local Bay Area hospitals. Once per month, families will be invited to attend a Giants game and a pre-game field visit to meet with the Poseys.

On the fundraising front, here's the hat: 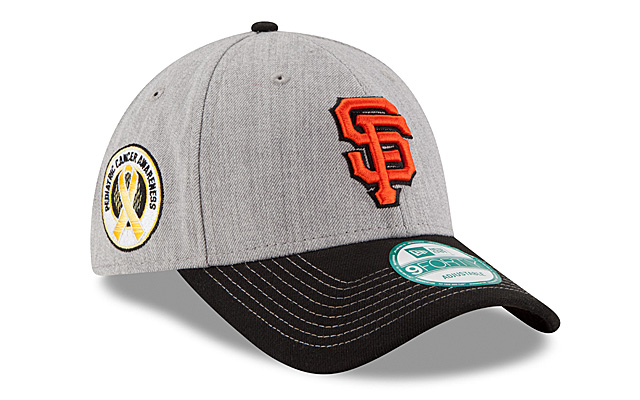 The hats are available right now in AT&T Park's Giants Dugout Store and online at MLB.com for $27.99. They'll also be available at LIDS starting next week.

So go grab one, they are nice hats and support an excellent cause.

Kudos to the Poseys for this venture.

Matt Snyder has been a baseball writer with CBS Sports since 2011. A member of the BBWAA, he's now covered every World Series since 2010. The former Indiana University baseball player now lives on the... Full Bio