The Royals are going back to the World Series. Here's a breakdown of all the chaos that happened at the end of Game 6 of the ALCS Friday night.

Friday night, the Royals beat the Blue Jays in Game 6 of the ALCS (KC 4, TOR 3) to win their second consecutive AL pennant. They won the best-of-seven series four games to two and will take on the Mets in the World Series starting Tuesday. Yes, Tuesday.

The last six outs of Game 6 -- that covers the bottom of the eighth and top of the ninth -- were rather chaotic and action-packed. The Royals took an early lead but the Blue Jays battled back thanks to a pair of Jose Bautista home runs, including a game-tying two-run shot off Ryan Madson in the top of the eighth. Here's a breakdown of those final six outs.

BOTTOM OF THE EIGHTH INNING

Let's set the scene: the score was tied 3-3 thanks to Bautista's home run, and a 45-minute rain delay had just ended. The umpire crew called for the tarp quickly, so it didn't take the grounds crew long to get the field ready. Now let's recap how the Royals took the lead, piece by piece.

John Gibbons went to his closer in the eighth inning.

Following the rain delay, Blue Jays manager John Gibbons went right to closer Roberto Osuna with the score tied 3-3 in the eighth inning. He didn't wait for the ninth inning or a save situation that may or may not come. Gibbons went to his best arm against the middle of the Royals lineup in a win or go home game. It seems like an obvious move, but boy, too many managers these days save their closer for the ninth inning because it's their inning. (Or worse, save him for a save situation on the road.)

Cain took a great pitch to draw a leadoff walk in the eighth.

Osuna started the eighth inning by walking Lorenzo Cain on seven pitches. It was a phenomenal at-bat by Cain, who fouled off some tough fastballs and took some nasty sliders off the plate. Look at this slidepiece he took in a 3-2 count for ball four:

That's a quality slider and Cain spit on it. Walks are boring and individual takes are even more boring, but gosh, that is a beautiful pitch by Osuna and a fantastic take by Cain. Most hitters hack at that slider and hope to foul it off once they realize it's a slider and not a fastball. The leadoff walk got the inning started.

Hosmer drives in the game-winning run, but it's so much more complicated than that.

In the annals of the postseason, it will read the Royals took a 4-3 when Eric Hosmer singled in Cain in the bottom of the eighth. Here's the play-by-play:

That's it. Nice and simple, right? Well, no. There's a lot to unpack in that one little play.

First, yes Hosmer singled to right. It was a nice at-bat. Osuna left a 2-2 slider a little too high and Hosmer hooked it to right. Cain was going to go first-to-third easy.

Second, Bautista picked up the ball, spun around and threw wildly to the infield. The throw went into second base, which is a good play most of the time, but not this time and not against these Royals.

Third and finally, Royals third base coach Mike Jirschele recognized Bautista's throw was not going to the cutoff man, so he waved Cain home. Cain never broke stride and managed to score well ahead of the relay throw to the plate. He scored from first on a single.

Two bad things happened: Osuna made a poor two-strike pitch and Bautista made an ill-advised throw. He blindly threw to second rather than hitting the cutoff man, which, if nothing else would have given the Blue Jays a chance to make a play at the plate. It might have caused Jirschele to hold Cain at third. 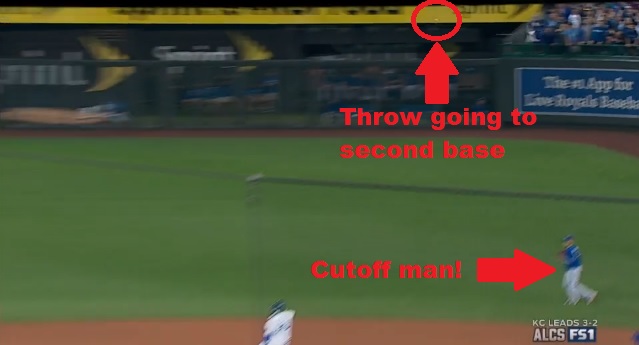 Yeah, not good. That was a tough play. It was not routine. Cain forced that wild throw with his speed. The Royals are relentless. They never don't apply big time pressure.

Moustakas missed a meatball from Osuna.

Kendrys Morales, who took Osuna deep in Game 3, ripped a line drive single back up the middle following Hosmer's single to put runners at first and second with no outs. (Morales was lifted for pinch-runnner Terrance Gore.) The pressure was really on Osuna.

Osuna fell behind in the count 3-0 to Mike Moustakas, who turned it loose 3-0 and fouled off a 97 mph fastball. Osuna following that with a 98 mph heater, this one a little more out over the plate, and Moustakas juuust missed it. 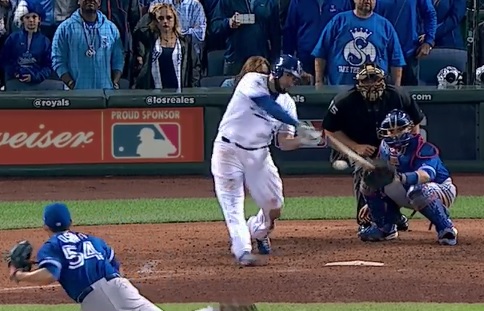 Moustakas was a hair away from some very loud contact and potentially blowing the game open. Velocity isn't everything, we all know that, but man it sure is nice to have. You can get away with that pitch location when you're throwing 98 mph. When you're only packing 92 or 93? Not so much.

Watching the game live, Salvador Perez's inning-ending 6-4-3 double play seemed ominous. The first three batters of the inning reached base -- two of the three made hard contact -- and it seemed like things were starting to snowball on Osuna. The Moustakas out was huge.

Perez, who otherwise has had an excellent postseason, saw three sliders from Osuna and swung at all three. He missed the first, fouled off the second, and pulled the third to Troy Tulowitzki at short for the inning-ending double. Perez almost beat it out, but alas.

Although he gave up the go-ahead run, getting out of that first and second with no outs jam without allowing anything else was a great job by Osuna. He got away with a bit of a mistake to Moustakas, then executed the game plan well to get Perez to bang into the double play.

It ultimately did not matter, but it really felt like the Royals should have scored more than one run that inning. That is especially true given how hectic the ninth inning became almost instantly.

TOP OF THE NINTH INNING

Here's how the frame went on a play-by-play basis ...

As you can see, the Jays had, thanks to Russell Martin's and Kevin Pillar's reaching base and Dalton Pompey's and Pillar's base-running, runners on second and third with no outs. Actually, Pompey's Game 6 larcenies deserve some color television footage ...

That, needless to say, is a good spot for a team that needs one run to tie.

In fact, throughout the modern era teams with runners of second and third and no outs have averaged 1.45 runs for the inning in question. In other words, a merely average outcome over the remainder of the top of the ninth would've tied the score. As you can see, Wade Davis struck out Dioner Navarro for that first out of the inning, but then things tilted again in the Jays' favor when Davis, throwing hard but struggling somewhat with his command after the rain delay, started off Ben Revere 2-0. Here's how the five-pitch AB unfolded ...

The putaway breaking ball was borderline, but stike two -- the fourth pitch -- was a high fastball that was off the plate. That turned what should've been a 3-1 count into a 2-2 count, and it changed the tenor of the at-bat. Revere, who struck out looking just 17 times in the regular season, was frozen.

Back to that key fourth pitch of the AB, it was a pitch location that benefited the Royals on Friday night ...

See those three red strikes outside the upper left-handed portion of the zone? The middle one is the pitch to Revere. The top one is the 1-1 pitch from Davis to Dioner Navarro, the batter before Revere. The bottom one is the 2-1 pitch from Kelvin Herrera to Ryan Goins in the seventh. In all three instances, it was a hitter from the left side versus a right-hander.

In any event, the Revere strikeout dropped the Blue Jays' chances of winning Game 6 from 44 percent to 19.4 percent. That made it one of the most important plays of the entire series. After that, Davis was tasked with retiring the likely AL MVP in a hitter's count ...

Royals win, by a hairsbreadth or three.

5 takeaways as Rays walk-off with win vs. Red Sox