Red Sox second baseman Dustin Pedroia was taken out of Thursday night's game with the Yankees after being hit in the forearm, but manager Bobby Valentine said it was a precautionary measure. Also, new Reds closer Ryan Madson may have suffered a setback. 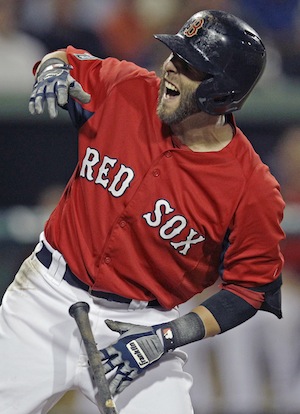 Red Sox second baseman Dustin Pedroia left Thursday night's game with the Yankees after getting hit in his right arm, but he was diagnosed with just a contusion of his right forearm and is considered day-to-day.

In an in-game interview on TV, Red Sox manager Bobby Valentine said he was just being cautious by taking Pedroia out of the game. [MLB.com]

• New Reds closer has yet to pitch in a game in his new uniform and it's unclear when that may happen. Madson has been dealing with elbow soreness all spring and after a simulated game on Tuesday, he was expected to pitch in a minor-league game on Friday. That's not going to happen now, but the team isn't saying why. [Cincinnati Enquirer]

• There wasn't much good news in Nationals camp on Thursday, as the team is still unsure about the status of right fielder and closer , manager Davey Johnson told reporters.

Morse, who is struggling with a strained right lat, had another treatment on his muscle. It's believed, Johnson wasn't sure, that Morse underwent a platelet-rich plasma injection for the injury.

The team sent Storen for tests on his right arm after the closer felt discomfort after playing catch on Wednesday. Johnson told reporters there was no timetable for his return. [Washington Post]

• Morse wasn't the only player to get platelet-rich plasma therapy, as Orioles left-hander received two rounds of the treatment to help the inflammation in his left shoulder. Britton said Dr. James Andrews told him his recovery could take six weeks or more. [MLB.com]

• Rangers pitcher said he isn't concerned over the tightness in his right shoulder that cut short his start on Tuesday. He threw long toss on Thursday without any issues and is scheduled to throw a bullpen on Friday. [MLB.com]

• Indians outfielder told reporters his right hamstring injury is "nothing serious" and expects to return to the team's lineup soon. [MLB.com]