Pick and roll not the force it once was, but it still drives best NBA offenses

The pick-and-roll used to be an impossible play to defend, but NBA defenses found a way to adjust. How effective is it still today?

The NBA is all about copying what has been working recently. The teams that manage to get out in front of the trends tend to have the most success. There are elements of luck to it all and you have to have the talent to execute your latest endeavor, but the copycat league is always looking to exploit what's hot before the rest of the league figures out how to neutralize it.

When the NBA changed the rules in 2004-05 to open up the offensive game, the Seven Seconds Or Less Phoenix Suns took the league by storm. It was their wide-open, pick-and-roll heavy style of offense that had everyone scrambling for answers. They were forcing defenses to think outside of their conventional tendencies and figure out how to keep up with a Steve Nash/prime Amar'e Stoudemire pick-and-roll, which is still terrifying to even think about. Still, Gregg Popovich and the Spurs were able to counteract those Suns at pretty much every turn, and the star power and size of the Los Angeles Lakers eventually recaptured the league a few years later.

More than anything, however, it was Tom Thibodeau and his inventive pick-and-roll defense for the Boston Celtics -- and later the adjusted version for the Chicago Bulls -- that became the standard for taking away the overall effectiveness of the pick-and-roll. In Boston, he used Kevin Garnett to hedge harder on pick-and-rolls than we've ever seen anyone do it. In Chicago, he found ways to keep the paint cut off and funnel dribblers into problem areas on the court they didn't know existed. Since then, a lot of teams and systems have taken the tenets of his defensive schemes, added the switchability of medium-sized, versatile defenders, and created real problems for a pick-and-roll attack that once seemed perfect for deconstructing a defense.

Pick-and-roll offense is still about forcing decisions from the defense. Collapse to take away the roll man, or press up and don't let the initiator score? How do you help take away the scoring in the middle of the floor without leaving a shooter open in either corner? Create enough decisions for the defense and eventually you can break down its discipline. Once you cause that erosion, you can continue to force decisions by reading the defense and reacting to its mistakes.

That's a little harder to do in today's game than it was even five years ago. The pick-and-roll revolution renaissance has been curtailed a bit because defenses, despite what retired players may lead you to believe, are smarter and better than ever. The anticipation of defenses makes it harder to force those decisions in the ways the offenses want to go. In fact, the pick-and-roll, which has been thought to be the hardest thing to guard in the post hand-check era, has seen a dramatic drop in its effectiveness over the years.

Via Synergy Sports, the pick-and-roll, in general, is far less effective league-wide now than it was five seasons ago, but overall offensive efficiency is also less dependent on pick-and-roll play than it was back in 2006-09. The best offenses excel in this system. The five best offenses in the NBA (Golden State Warriors, Oklahoma City Thunder, San Antonio Spurs, Toronto Raptors, and Cleveland Cavaliers), in fact, are all in the top 12 in points per possession on pick-and-roll plays. The Warriors are first (surprise), the Thunder are ninth, the Spurs are fifth, the Raptors are second and the Cavs are 12th. What's interesting is the frequency these teams are using the pick-and-roll, according to Synergy. 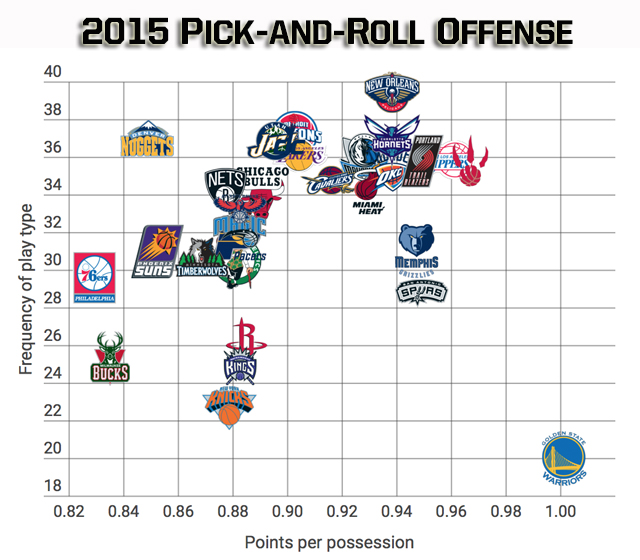 There is some noise in how this gets measured and categorized, but what's interesting is that nobody uses the pick-and-roll for a lower percentage of their plays than the Warriors; they're just incredibly efficient when they do. The Warriors also have the fourth highest frequency in transition possessions, so part of this lack of pick-and-roll could just be tied to the fact that they run off your turnovers, they run off your missed shots, and they even run off your made shots.

Teams like the Raptors, Los Angeles Clippers, and Portland Trail Blazers still do a good job of running pick-and-roll plays with their point guard heavy offensive systems. Kyle Lowry, Chris Paul, and Damian Lillard can hurt you in so many ways with the PnR that you'd be foolish not to use it. But it can be pretty tough to get consistency against defenses loading up prior to when the pick is made. It's why the Spurs and Warriors are so difficult to defend with their flowing offenses that thrive on read-and-react plays from everybody on the floor.

The pick-and-roll isn't going out of style, though. As the defensive rules have been maximized more and more, post play has fallen by the wayside for a lot of teams. That means a huge increase in pick-and-roll plays over the last 10 years, nearly doubling the frequency at which they're run. There are also a lot of big men in the NBA who still struggle with defending the pick-and-roll -- not to mention, when you're playing against younger players and rebuilding cores, it's easier to get them to pay when they forget they have to go over the screen against deadly initiators. Those advantages will always exist in some form throughout the course of any given game.

Eventually, the read-and-react stuff may become the new fad or staple of an offense because it's so hard to plan against. And when that happens, we'll be waiting for the Tom Thibodeau of defending the read-and-react to eventually catch up to the latest offense that is deemed impossible to defend.

NBA Summer League schedule: How to watch every game