In Game 1 between the Boston Celtics and Washington Wizards a few weeks back, Markieff Morris went up for a jumper and landed on Al Horford's foot, rolling his ankle after the Celtics forward tried to contest the shot. Morris certainly thought it was an intentional act by Horford, and it led to some bad blood between the two later in the series.

There was a short debate about whether it was a dirty play, but the discussion went away pretty quickly, especially once Morris returned to the series and didn't look too affected.

After Sunday's Game 1 between the Warriors and Spurs, however, that debate is sure to pick up again. In the third quarter, the Spurs were cruising, and looked well on their way to a shocking blowout victory at Oracle Arena. Then, Kawhi Leonard reinjured the ankle that kept him out of Game 6 against the Rockets, and everything changed.

First, Leonard rolled the ankle after taking a misstep on his own teammate's foot as he stepped back toward the Spurs bench after making a baseline jumper.

He quickly left the game, but after a short break he was back out there, giving hope that it was just a little tweak of his ankle, and wasn't as bad as it looked. Unfortunately, it wasn't long before he was back on the ground.

Once again working along the baseline, Leonard rose for a jumper, but as he came down, he landed on Zaza Pachulia's foot after the big man came out to contest, and rolled the ankle for the second time on the afternoon.

Given that Leonard is a star, his ankle was already injured, and the Warriors went on a crazy 18-0 run after Leonard went out, Pachulia's closeout is sure to be the main topic of conversation from now until Game 2.

As you can see, Pachulia contests Leonard's shot in the corner, and after his initial closeout, everything looks fine. He's under control, and his feet are underneath him, giving Leonard plenty of room to land after he takes the jumper. 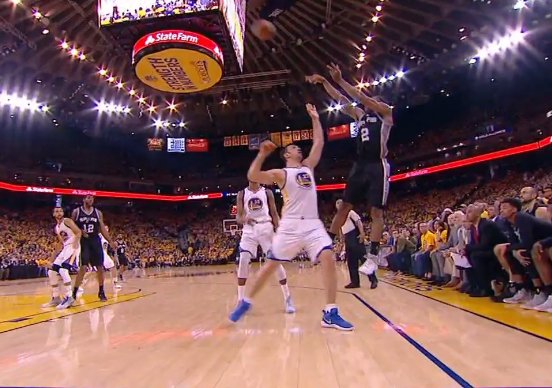 However, the next few moments are where people have centered their complaints. Pachulia extends his left leg for a second time, which moves his foot right into Leonard's landing area, and we saw the painful result.

Those are the facts. So what are the two sides of the argument?

This is the point of view that many of the players are taking, including Leonard, who doesn't believe it was dirty.

Kawhi Leonard on Zaza Pachulia: "Did he step under it? Like on purpose? No, he was contesting the shot. The shot clock was coming down."

Unsurprisingly, Pachulia and his teammates agree.

Zaza on being blamed for Kawhi coming down on his foot: "When you are 6-11 and you play hard you get blamed for a lot of things." #WCFinals

KD on fans alleging that Zaza Pachulia intentionally slid under Kawhi. "You can't listen to people on Twitter. They're irrational."

Their argument is that Pachulia didn't do this on purpose, that he simply was making a hard closeout, and it unfortunately resulted in Leonard coming down on his foot. Pachulia had his head turned away from Leonard as he lands, and it would take impressive coordination to put his foot right in the exact spot where Leonard's foot was going to come down. In addition, Pachulia doing it on purpose would mean that he went in with the sinister intention of trying to injure an opponent.

On the other side of the coin, you have the argument that this is a dirty and dangerous play, that Pachulia knew exactly what he was doing, and shouldn't have done it. Yes, Pachulia isn't as athletic as some other guys in the league, but being in the NBA he still has elite body control. Did he know exactly where Leonard's foot was going to land? No, but he knew the general area, and second leg extension put his foot right in that area, making it a big possibility that Leonard could land on it.

At the very least it was reckless, and at worst, it was an intentional attempt to injure an opponent. When a similar play happened to Kobe Bryant back in 2013, he called it a "dangerous play."

So was it a dirty and dangerous play? Or do you agree with Leonard that it was just a hard play and unfortunate accident? Sound off in the comments with your thoughts.

NBA Mock Draft: Magic can't pass up Holmgren at No. 1