Further proof that you don't mess with Pat McAfee

In what might go down as the most unlikely feud of the 2016 NFL season, Colts punter Pat McAfee and Browns receiver Terrelle Pryor briefly went at it on Twitter over the weekend.

It all started on Thanksgiving when Pryor was sitting at home watching the Colts play the Steelers. During the second quarter, the Colts called a fake punt on fourth-and-6, and the play ended up working perfectly.

McAfee, who was also the team's emergency quarterback in the game, threw a pass that went for a 35-yard gain and a first down.

The Colts punter then celebrated his perfect pass by strutting on the field because that's what punters do now.

If you haven't been watching any Raiders games this season, King has been celebrating after almost every good punt that he makes.

Every NFL punter needs to be like this 😭 pic.twitter.com/24A9N6TNIr

Apparently, McAfee didn't like the fact that Pryor was calling him a copycat, so the Colts punter shot back with a savage burn that will be remembered for decades to come. 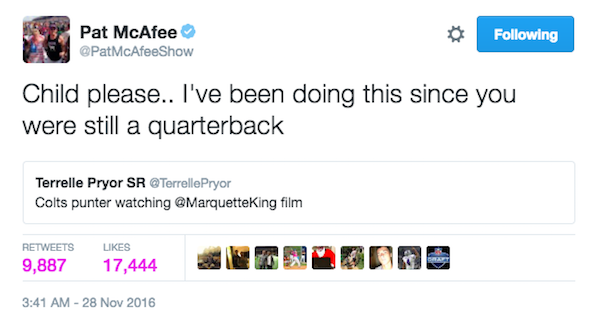 OUCH! Long after both players have retired, people will still be talking about that tweet. It will likely be seen as an honor by our grandkids to be able to tell them that we were alive when that tweet was sent. But for real, McAfee's tweet is vicious. The guy is making fun of the fact that Pryor couldn't make it in the NFL as a quarterback.

"Maybe you should win a game before critiquing anyone's game celebrations" would've also been an acceptable tweet from McAfee.

The sad news for the Colts is that McAfee's dance basically ended up being the highlight of the night for them in a Thanksgiving game they ended up losing 28-7.

It's only Week 8 but these teams are done

10 NFL trades that should happen before deadline