Just Because: Len Dawson enjoys a sweet cig during Super Bowl I

What do you do if you lose Super Bowl I? Smoke break!

It's 1967. You are a man's man, and you play football with a good head of hair under your helmet (you can probably thank Bart Starr for the latter).

And man, do you need a cigarette after while playing in a hard-fought Super Bowl I contest in which the Packers dominated those AFL underdogs 35-10.

Well, Chiefs quarterback Len Dawson can feel your pain. And he knows how to ease it as well. With a few drags of a sweet, sweet postgame cigarette. 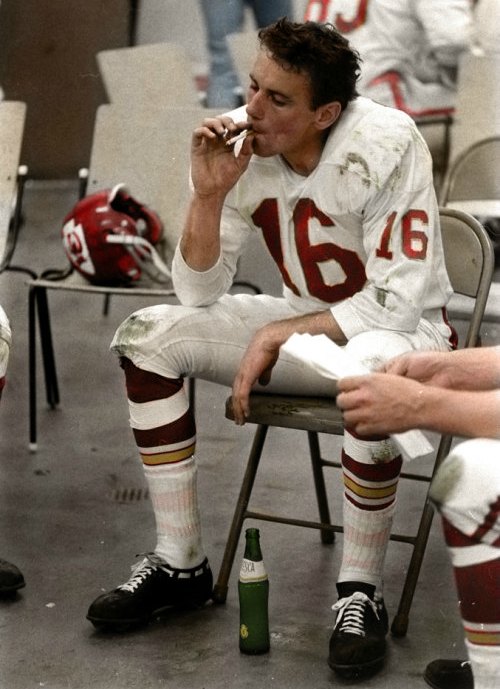 If Dawson, however, wanted to be a REAL man about the whole thing, he'd have a bottle of beer (preferably Budweiser) or a tall, cool glass of scotch between his feet. Instead, he's sipping on Fresca.

But that's OK, and all's well that ends well.

The next time the Chiefs were in the Super Bowl, they won the game. Instead of smoking a cig in the locker room after the game, he received and welcomed President Nixon's congratulations on the phone.

Robinson says joining Rams 'will bring out best in me'

Tight End U returns: Kittle, Kelce among 50-plus