SAN JOSE, Calif. (AP) Sebastian Aho scored the tiebreaking goal with 1:58 remaining in the third period and the Carolina Hurricanes handed the San Jose Sharks their third straight loss to open the season, 2-1 on Friday night.

Martin Necas scored his second goal in two games for Carolina to tie it late in the second period before Aho won it in the third when he deflected a point shot from Brett Pesce past James Reimer.

''Just a great play by Pesce taking a little second to look,'' coach Rod Brind'Amour said. ''Aho beats his guy to the net and on the tape and puts it in. ... I think we got what we deserved tonight for sure.''

Antti Raanta made 18 saves, including one in close to stop Tomas Hertl in the closing seconds as the Hurricanes improved to 2-0 on the season.

''Obviously a little chaos there and the puck was rolling in the crease there,'' Raanta said. ''I was just trying to keep my pads on the ice and not letting anything go in. Maybe a little bit of luck also there. Got my body in there and was able to make the save and you hear the buzzer so obviously a good feeling to make that a save and obviously get that win.''

San Jose had lost the first two games of the season to Nashville in the Czech Republic but were unable to get on the winning side in the home opener for new coach David Quinn.

The Sharks opened the scoring late in the first period when Jaycob Megna set up Svechnikov in the high slot for a quick shot that appeared to surprise Raanta.

Svechnikov's younger brother, Andrei, was on the ice for Carolina on the goal - marking the first time in eight games they have played against each other that one brother was on the ice when the other scored. Andrei scored for Carolina against Evgeny's Detroit team on March 4, 2021, but Evgeni wasn't on the ice.

The Hurricanes dominated the second period, holding San Jose without a shot on goal for the first 13:22 and outshooting the Sharks 16-4. But they couldn't get anything past Reimer until Andrei Svechnikov took the puck away from Kevin Labanc in the neutral zone and set up Necas for the tying goal with 22.9 seconds remaining in the period.

Necas' four points in the first two games are one shy of the franchise record set by Mark Howe and Mike Rogers in the 1980-81 season when the team played in Hartford.

The Sharks played a pregame video tribute to defenseman Brent Burns, who was traded to Carolina over the summer. Burns was one of the most popular players during his 11 seasons in San Jose. He won the Norris Trophy in 2017 as the league's top defenseman. He has 172 goals and 422 assists in 798 games with the Sharks.

''It was special. It was great,'' Burns said. ''It was awesome to see the video and see some of the guys and some of those moments that we had. It's just a special place. It's great people.''

The Hurricanes sent F Ondrej Kase back home to be evaluated for a possible concussion. ... Sharks F Alexander Barabanov remains sidelined with a lower-body injury. ... San Jose F Timo Meier and D Mario Ferraro were in the lineup after being slowed earlier this week with upper-body injuries.

CARHurricanes
SJSharks
STARS OF THE GAME 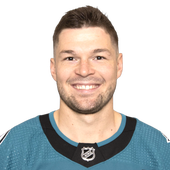