CALGARY, Alberta (AP) Nazem Kadri scored the tiebreaking goal with 4:18 left in the third period and had two assists to lead the Calgary Flames to a 3-2 victory over the Arizona Coyotes on Monday night.

Dillon Dube and Elias Lindholm also scored for Calgary, which has won five of its last six games at home. Jonathan Huberdeau added two assists. Dan Vladar, starting for the fifth time in the last seven games, made 18 saves.

Calgary led 2-0 in the first period before Arizona tied it early in the third. Kadri regained the lead for the Flames on a power play as he got his team-leading ninth of the season off a pass from Tyler Toffoli to end an eight-game goal-scoring drought.

''I've had a lot of great opportunities over the last handful of games so it's nice to finally see it hit the back of the net,'' Kadri said.

The 32-year-old center had a strong start to the campaign, recording eight goals and 13 points through the first 16 games after signing with Calgary following a Stanley Cup championship run with the Colorado Avalanche.

''There was a little frustration starting to seep in,'' Kadri said. ''It's funny how this game works, sometimes you feel like you're playing great, but no results to show for it and sometimes it can be flipped.''

Shayne Gostisbehere and Jakob Chychrun each had a goal and an assist for Arizona, which has lost nine of its last 10 (1-6-3). Karel Vejmelka had 24 saves.

Down 2-1 to start the third period, Arizona tied it at 5:50 when Chychrun snapped a shot over Vladar's shoulder. It was Chychrun's third goal in seven games since the defenseman returned from a wrist injury that sidelined him the first six weeks of the season.

However, nine minutes later, Chychrun took a tripping penalty that put Calgary on the power play for the go-ahead goal.

''We battled back and got ourselves to tie the game up. That penalty's just . I don't know. I have no intention of tripping that guy obviously,'' Chychrun said. ''I'm playing a 1-on-1 and breaking the play up and try to go up the ice and beat him up the ice and he just falls. I think it's just terrible but it's unfortunate. It cost us a point at least.''

The Flames finished the night a perfect 2 for 3 on the power play, after having been in a 2-for-21 slump over the previous seven games. Arizona went 0 for 2 on the man advantage.

Dube opened the scoring as he deflected Chris Tanev's point shot with 5:47 left in the first for his fifth goal of the season and fourth in his last eight games.

Lindholm converted on Calgary's first power play of the game, scoring his ninth of the season with 2:59 left in the first to make it 2-0.

Gostisbehere pulled the Coyotes within one with 6:07 left in the second for his fifth.

Coyotes defenseman Juuso Valimaki, selected 16th overall in the 2017 draft, is the fourth Flames first-round pick to play against Calgary during its homestand. He follows Matthew Tkachuk (2016) and Sam Bennett (2014) with Florida on Tuesday and Sean Monahan (2013) with the Canadiens on Thursday.

Matias Maccelli's assist extends the 22-year-old's point streak to four games (one goal, five assists). It's also his 15th helper on the season, which leads all rookies. Maccelli is second in rookie scoring behind Seattle's Matty Beniers.

Coyotes: At Edmonton on Wednesday night to wrap up a season-high 14-game road trip.

Flames: Host Minnesota on Wednesday night in the finale of a five-game homestand. 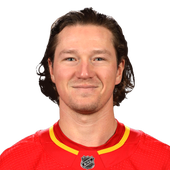