After the Flyers controlled much of the action in their offensive zone for the first three minutes of the extra period, Marchessault stole the puck from Kevin Hayes, raced in on a breakaway and beat goalie Carter Hart to give Vegas its first home win against Philadelphia since Jan. 2, 2020.

''We didn't have the puck a lot in the overtime, and I was just lucky there to get away from Hayes,'' said Marchessault, who has scored a goal in four consecutive games. ''We had to find a way to win a hockey game tonight. I think that's what we did.''

Adin Hill made 27 saves, including Philadelphia's lone shot on goal in overtime. William Carrier scored in the first period for Vegas.

Scott Laughton scored early in the second for the Flyers, and Hart finished with 32 saves.

''Obviously a disappointing finish, but it's a hard-fought point,'' said Hart, who is 7-1-5 when facing 30-plus shots. ''That's a really good hockey club, so we stuck with them for the whole game.''

Western Conference-leading Vegas improved to 20-8-1, bouncing back from Wednesday night's 5-1 loss to the Rangers - the team's third straight defeat at home.

''It's nice to win at home, first of all. It's been a while,'' coach Bruce Cassidy said. ''I thought we stayed patient. We were a more mature team tonight, staying in the game and finding a way to win. It was that type of game that someone had to (make a play). Good for Marchy. ... I wasn't sure he was going to pull away at the end there. But he had it in him. Good for him.''

Carrier continued a breakout season when he chipped home Shea Theodore's rebound over Hart's shoulder from the doorstep. It was Carrier's ninth goal, equaling his career high.

Philadelphia has allowed its opponent to score first in 21 of 28 games this season.

Hill gave the Flyers a gift when he misplayed a loose puck behind the net and sent it right to Laughton, who fired it in off the netminder as he scrambled back to the crease.

''I just kind of had to laugh it off. You have to move on, focus on the next play,'' Hill said. ''It's an unfortunate bounce. Obviously, I'm not happy with the play I made. ... If you kind of get mad about it, think about it, worry about it, then I think you're gonna kind of be off your game. I think that's a big part of being a goalie, is just kind of being able to shrug off a goal and move on to the next shot.''

NOTES: Hill improved to 7-2-1 this season. ... Theodore was helped off in overtime after appearing to bang shins with Philadelphia defenseman Travis Sanheim. Cassidy didn't have an update after the game and said Theodore would be evaluated in the morning. ... Philadelphia defenseman Cam York, recalled from Lehigh Valley (AHL) on Thursday, made his season debut for the Flyers. The 21-year-old played 17:54 and registered one hit and one block. ... Flyers center Lukas Sedlak had a career-high seven hits. ... Philadelphia has lost all six games that went to overtime this season, while Vegas has won six of seven. ... In a rare occurrence, all three goals were unassisted. 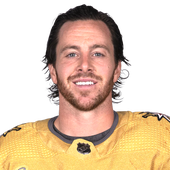