Jack Roslovic had two goals and two assists, Patrik Laine had a goal and two assists, and Boone Jenner and rookie Kirill Marchenko also scored for the Blue Jackets. Gaudreau and Vladislav Gavrikov each had two assists and Elvis Merzlikins stopped 33 shots.

Anze Kopitar scored twice, and Blake Lizotte, Jaret Anderson-Dolan and Adrian Kemp also had goals for the Kings, who earned a point after rallying from two two-goal deficits. Jonathan Quick finished with 20 saves.

In the extra period, Gaudreau rushed in and tipped the rebound of Laine's shot. The goal stood after a lengthy video review that revealed the Kings' Kevin Fiala directed the puck into his own net.

''We can take them in overtime, as long as we get our points,'' Roslovic said. ''It's great to see results for the work that we put in this year.''

The Blue Jackets carried a two-goal lead out of the first period after Marchenko's first NHL goal at 6:44 and Jenner's team-leading fourth power-play score, 17 seconds into a Kings' penalty.

The Kings appeared to take charge in the second period, as Kopitar cut the lead in half at 4:42 and Lizotte pulled Los Angeles even at 8:25.

Laine used a give-and-go from Roslovic to put Columbus back in front just after the midpoint of the second, before Anderson-Dolan pulled the Kings even again 5 minutes later.

Roslovic then scored twice 1:31 apart - one short-handed and one on the power play - to put Columbus ahead 5-3 with 29 seconds left in the period. He became the fourth player in Columbus history with a short-handed and power-play goal in a game - the first since Rick Nash in 2009.

The Kings looked to control the third period, as they outshot Columbus 16-7. Kopitar cut the lead to one at 4:52 and Kempe tied the score 39 seconds later.

''I really liked our first,'' Blue Jackets coach Brad Larsen said. ''I thought we were really plugged in. The second period, we give up two odd-man rushes in the first 1:10, and both differently. It can't happen. Then they get the break away and so we lost some momentum there.

''We were on our heels in third, so it's great to score again. You hope you win the game with six goals.''

Joonas Korpisalo, pulled from Columbus' Friday win over Calgary with a lower body injury, was placed on injured reserve and is expected to miss at least a week. The Blue Jackets moved up Jet Greeves from AHL Cleveland to back up Merzlikins. ... Kings D Drew Doughty did not play due to a lower-body injury. He is listed as day-to-day.

Marchenko became the 22nd Blue Jackets player to score a goal this season, tying Columbus with Detroit for the most scorers in the NHL.

Kings: At Buffalo on Tuesday night.

This story was first published on Dec. 11, 2022. It was updated on Dec. 12, 2022 to correct that Columbus' Jack Roslovic was the fourth Blue Jackets player to score a short-handed and power-play goal in a game and first since 2009, not the first since 2009 to have a four-point game. 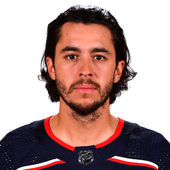