Talbot earned the victory with an impressive 32-save shutout as the Senators blanked the Anaheim Ducks 3-0 on Monday. But forwards Tim Stutzle and Tyler Motte both left the win early with injuries, forcing Ottawa to play the rest of the game with only 10 forwards.

''We checked real hard,'' said Senators head coach D.J. Smith. ''The NHL's not meant for 10 forwards but give guys credit.

''Guys played out of position, played different positions, played with different linemates and did a real nice job.''

Stutzle went awkwardly into the boards after being hit by Brett Leason midway through the first period and favored his right arm as he raced down the player's tunnel. Motte then went down hard late in the same period and suffered what the team called an upper-body injury.

Smith had no update on either player following the game.

''Timmy's a big piece to this team,'' said Claude Giroux, who was moved to Ottawa's first power-play unit in Stutzle's absence. ''He's one of our best players and I'm not too sure what the status is, but hopefully he's fine.''

Alex DeBrincat had a pair of power-play goals for Ottawa (12-14-2) and Parker Kelly also scored to support Talbot's shutout. The Senators goalie said he was partly inspired by a pre-game ceremony honoring former Ottawa defenseman Wade Redden, who became the first player named to the Senators Ring of Honor.

''I haven't played my best here in front of our fans, but to go out there and do it on a night celebrating Redden in the Ring of Honor - it's a pretty special night for him so feels good to get the win for him too,'' said Talbot.

Strangely enough, both Talbot and DeBrincat were considered game-time decisions after neither took the morning skate.

''Who needs morning skates, right?'' said Talbot with a laugh. ''I mean (DeBrincat) didn't skate either and he came out with two goals so I mean, I think they're overrated.''

Goaltender Lukas Dostal made his season debut in net for the Ducks (7-19-3). He stopped 35 shots after being recalled from the American Hockey League's San Diego Gulls.

''Coming from the AHL, you know, at the start, the game's a little bit different,'' said Dostal. ''Took me maybe just a couple of minutes to adjust, but as the game went on, I felt pretty good out there, actually.

''Obviously, still upset we lost, but personally, I felt pretty good out there.''

The 22-year-old Dostal made a huge save on Shane Pinto in the second and bailed the Ducks out on a terrible line change late in the same period when the Senators had a 3-on-0 rush.

''(Dostal) played extremely well,'' said Anaheim head coach Dallas Eakins. ''He made a couple of huge saves. Just an absolutely horrible change in the second period and he made a huge one there, but he was real solid.

''He's a great kid. He's a kid that you can cheer for a lot just because of his character, his attitude, how he works.''

Kelly scored his first of the season 5:42 into the game, tipping a Nikita Zaitsev shot past Dostal.

DeBrincat extended his point streak to six games (3G, 4A) with a power-play goal midway through the first.

Ducks: At Toronto on Tuesday night in the second of a five-game trip. 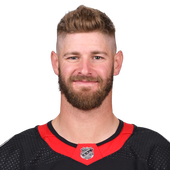