MONTREAL (AP) It's rare that goalies are the stars in an NHL shootout, but Calgary's Jacob Markstrom and Montreal's Jake Allen stole the show on Monday.

Flames forward Tyler Toffoli took a double-minor penalty at the start of overtime, but Markstrom denied the Canadiens for four minutes to force a shootout. Allen got the last laugh on the other side of the ice, however, denying Rasmus Andersson and Nazem Kadri in the shootout to seal the Canadiens' 2-1 win.

''We had some good looks, Markstrom made some great saves. You gotta give credit to the PK sometimes,'' said Allen. ''I think our guys moved the puck really well and had good opportunities and sometimes it just doesn't go in.

''That's hockey and we got it done in shootouts so it's not a big deal.''

Nick Suzuki and Kirby Dach scored in the shootout as the Canadiens snapped a three-game home losing skid.

''(Allen) was great, he came up huge on penalty kills,'' Suzuki said. ''Big saves in big moments there in the third and he gave us the chance to get the two points.''

Josh Anderson tied the game for Montreal (14-12-2) in the third period, forcing overtime. Allen made 34 saves over three periods and the extra frame.

Jonathan Huberdeau scored in the second period for Calgary (13-11-5). Toffoli picked up one assist in his first game back in Montreal since getting traded to Calgary last season.

Jacob Markstrom made 37 saves as the Flames stayed winless in their three-game road trip.

After a scoreless opening period, Huberdeau jumped on a loose puck 5:04 into the second to break the ice for the Flames.

In a scary moment, Flames defenseman Chris Tanev took a Suzuki slap shot to the head while attempting to block a scoring chance during a Montreal power play. He skated off the ice, with help from his teammates, but did not return.

''It's tough, I mean, he doesn't stay down very often so when he stays down you're worried,'' Markstrom added. ''I haven't talked to him after, but hopefully he's OK.''

The Flames announced following the game that Tanev was sent to the hospital and his tests were negative, allowing him to travel back to Calgary where he will be reevaluated.

Suzuki took down Kadri with a check to the head five minutes later, which also sent the Calgary center to the dressing room. Kadri returned in the third period.

Canadiens winger Cole Caufield was taken to the dressing room in the second following a check from Trevor Lewis. Caufield did not return to the game and was listed with an upper-body injury.

The Habs levelled the score at 1:40 of the third period when Juraj Slafkovsky found Anderson in front of the net who tapped in his eighth goal of the campaign.

Tyler Toffoli's stay with the Montreal Canadiens was a short but memorable one. The winger, who was a part of the Canadiens' Stanley Cup run in 2020-21, returned to the Bell Centre for the first time since the trade that sent him to the Flames.

Canadiens: At Ottawa on Wednesday night before returning for a two-game homestand. 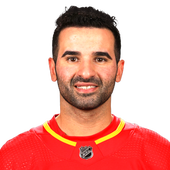