VANCOUVER, British Columbia (AP) Jordan Kyrou had three goals for his first career hat trick and had an assist as the St. Louis Blues beat the Vancouver Canucks 5-1 on Monday night.

Robert Thomas had a power-play goal and an assist, and Nathan Walker scored his first goal of the season for the Blues, who won their fourth straight and for the fifth time in seven games. Vladimir Tarasenko had three assists and Nicky Leddy added two, and Jordan Binnington stopped 33 shots.

Ilya Mikheyev scored for the Canucks, who lost their third straight at home to fall to 5-9-1 on the season. Spencer Martin made 22 saves.

Kyrou scored twice in the third period, giving him six goals in three games and 10 points in the last four.

The first period was scoreless with both goalies making big stops. Binnington denied Brock Boeser on a backdoor play on a power play early in the period, while Martin got in front of a point shot from Alexey Toropchenko through traffic.

The teams combined for three goals in 2:37 midway through the second period.

Kyrou opened the scoring with 9:35 remaining. Martin stopped a hard shot from Leddy, who got his own rebound and passed it to Kyrou.

The Canucks tied it 1:39 later after Mikheyev took a pass from defenseman Quinn Hughes, outskated the Blues' defense, and deked Binnington to stuff the puck in the far corner.

Walker made it 2-1 for St. Louis with just under 7 minutes remaining on a shot from the hash marks that sailed over Martin's glove.

Thomas gave the Blues a two-goal lead on a power play with 1:10 left in the middle period when he wired a pass from Pavel Buchnevich from the faceoff circle into the top corner of the net.

Canadian soccer hero Christine Sinclair of Burnaby, B.C., dropped the puck in a ceremonial opening faceoff. ... Boeser returned to the Vancouver lineup after missing two games with a non-COVID illness. ... Elias Pettersson, who leads the Canucks with 34 points and is second with 13 goals, missed his second game with a non-COVID illness. ... The Canucks called up G Artus Silvos from Abbotsford of the AHL when Collin Delia's wife gave birth to their second child Monday.

St. Louis: At Seattle on Tuesday in the third game of a five-game trip.

Vancouver: Host Seattle on Thursday in the finale of a three-game homestand. 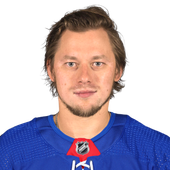