EDMONTON, Alberta (AP) Evan Bouchard scored the tying goal with 5 seconds remaining in the third period and Leon Draisaitl got the winner 22 seconds into overtime as the Edmonton Oilers beat the Florida Panthers 4-3 on Monday night.

Bouchard took a desperate shot from the slot late in regulation and beat Panthers goalie Spencer Knight stick side for his third of the season - all in the last two games - to tie it. Early in the extra period, Draisaitl took a pass from Connor McDavid and scored his 13th for the win. The 27-second gap marked the shortest time between a team scoring a regulation goal and an OT goal in NHL history.

''It was kind of a weird one from our group,'' said McDavid, who had a goal and two assists. ''I thought we were kind of lethargic. We've talked about hanging in there, about winning with your `B' and `C' game. ... We kind of stole it late.''

Edmonton has rallied to win two straight, including a 4-3 win at the New York Rangers on Saturday in which the Oilers trailed 3-0 before scoring four times in the third period.

''You don't want to find yourself in that situation too much, but when we are, we've got a lot of confidence that we can just continue to play our game, stick with it and come away with a point or two,'' Draisaitl said. ''We've put in two pretty solid games here.''

Matthew Tkachuk, Anton Lundell and Brandon Montour scored for the Panthers, who have lost five of their last six games. Knight finished with 36 saves.

Florida coach Paul Maurice called the McDavid-Draisaitl combination as a lethal one.

''They are two dynamic players, they are a lot to handle. They tied the game and then won the game for them,'' he said. ''Our goaltender was fantastic tonight. We found a way to get the lead back. That's a tough one to lose, with them scoring with 5 seconds left.

''The fight was there, but we know we can do better.''

Tkachuk opened the scoring 3:49 into the game as he took a pass that deflected off the skate of Oilers defenseman Darnell Nurse and put it past Skinner after taking a couple of whacks at the puck for his 10th of the season.

The Oilers appeared to tie the score seven minutes into the second period as Hyman put his own rebound past Knight in tight, but the goal was waved off after officials determined he had kicked the puck into the net following a quick review.

Hyman helped make up for it shortly after on the power play, sending a pass more than half the length of the ice to spring McDavid on a breakaway. He beat Knight with a backhand shot following a deke for his 17th of the season with 9:25 left in the middle period.

Edmonton took the lead 5:18 into the third as Brett Kulak's shot took a lucky bounce off Hyman right to the stick of a pinching Barrie, who got his fourth.

Florida tied it 2-2 about 5 1/2 minutes later as Lundell deflected Sam Reinhart's pass in, pushing his goal streak to three games.

The Panthers regained the lead with 4:44 remaining after a mad scramble in front on the power play saw the puck come back to Montour, who fired it into the top corner.

The Oilers have allowed six goals in the first three minutes of a game this season, the most of any team in the NHL. ... Undrafted forward James Hamblin made his NHL debut for the Oilers after being called up from Bakersfield of the AHL.

Panthers: At Calgary on Tuesday night for the second of a five-game trip.

Oilers: At Chicago on Wednesday night to open a two-game trip.

FLAPanthers
EDMOilers
STARS OF THE GAME 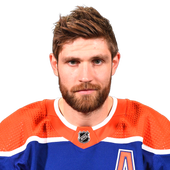