Kopitar scores as Kings hold off Canadiens for 4-2 win

MONTREAL (AP) Anze Kopitar and Viktor Arvidsson scored in the first period, and the Los Angeles Kings held off the Montreal Canadiens for a 4-2 win on Saturday night.

''It was kind of a weird game, there were a lot of blocks where I wasn't getting a lot of work so it was one of the games where you have to be mentally sharp,'' Copley said. ''The guys were doing a really good job with puck possession and playing on the other end so it was one of those games where you've got to stay sharp mentally. The guys battled hard and it's a good win for us.''

Edler said Copley has been solid.

''He's really calm back there,'' he said. ''He makes big saves at key times. His calmness is his strength and that kind of rubs off on everyone.''

The Kings took an early lead with two goals just 19 seconds apart. Kevin Fiala found Kopitar with a backhand pass from behind Montreal's net, and the forward beat Allen with a wrist shot 9:34 into the first.

Arvidsson then got his eighth of the season on a swift wrist shot from atop the left faceoff circle.

The Canadiens have conceded eight goals and scored one in their last four opening frames at the Bell Centre.

''In the first period, we had no legs and no energy,'' Montreal coach Martin St. Louis said. ''Those are normal things when you're coming back from (a Western Conference road trip), the first game is tough but we kept pushing.''

Caufield was inches from finding Montreal's opening goal in the third when his slap shot from the point hit the crossbar. The referees reviewed the play, confirming that the winger's shot had hit the iron.

Los Angeles opened a 3-0 lead 9:12 into the third when Edler deflected Blake Lizotte's shot from the point for his first goal of the season.

Hoffman got Montreal on the board at 11:41, taking a pass from Kaiden Guhle and scoring from the left faceoff circle with a wrist shot.

Caufield cut the Canadiens' deficit to one with just over two minutes remaining. His shot from along the boards was mishandled by Copley and ended up in the back of the net.

''If I was him, I'd shoot from anywhere,'' Montreal defenseman Chris Wideman said. ''He could probably score from the mezzanine. He's a shooter. He shoots and I think we can all take a page out of his book and shoot a little bit more.''

Montreal pulled Allen, and then called for a timeout with 1:02 left. But Kempe put the game away with his ninth on the season.

The Canadiens announced following the game that defenseman Mike Matheson had sustained a lower-body injury. He is day to day.

Kings: At Columbus on Sunday night in the third of a six-game trip.

Canadiens: Host Calgary on Monday night in the finale of a two-game homestand.

LAKings
MONCanadiens
STARS OF THE GAME 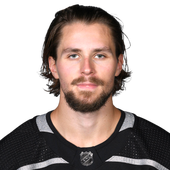