The manager expressed frustration over the growing number of spring training injuries. The latest was shortstop Ruben Tejada, with a groin strain. 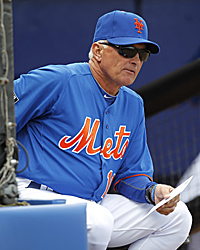 After shortstop Ruben Tejada had to be scratched from Tuesday's lineup -- "I feel a little bit tight, so I have to take care of that stuff right away," Tejada said (ESPN New York) -- Collins appears to have gone on a bit of a tirade to reporters. Several were tweeting out his quotes and going the all-caps route to describe him as "FIRED UP" or "REALLY not happy," among others.

"I'm just getting tired of going into the training room where I've got to sweat to see who can walk out of there," Collins said (Kevin Kernan via Twitter).

This isn't really a departure from recent fortunes, either, as the Mets have been a walking injury ward for the past few seasons.

Even if no one is really at fault for any of this, it's tough to blame Collins for being a bit frustrated. He's trying to put together a team to compete in one of baseball's best divisions and seemingly none of his players can stay on the field.