SEATTLE (AP) Cole Caufield and Josh Anderson scored seven seconds apart in the second period and the Montreal Canadiens snapped a two-game skid with a 4-2 win over the Seattle Kraken on Tuesday night.

Kovacevic was acquired by Montreal in October after being placed on waivers by Winnipeg. He has found regular playing time with the Canadiens this season, and has three assists to go with his goal.

''It's been a dream come true, really,'' Kovacevic said. ''It's been something that I've worked forward to. Everyone has a different path, and I feel like I've taken kind of a long road to get here. And that kind of comes with more gratitude. I have a lot of appreciation for where I'm at.''

It was Wright's first game back after a five-game conditioning stint with the AHL's Coachella Valley Firebirds. Wright's goal came against a Montreal squad that passed on him with the No. 1 pick of the 2022 NHL draft. Oliver Bjorkstrand and Yanni Gourde assisted.

''It's a great feeling,'' Wright said. ''I don't really remember a whole lot of the play; I kind of blacked out at the celebration there. (I) was super excited, obviously.''

Caufield and Anderson answered in the second, scoring at 2:05 and 2:12, respectively, to give Montreal a 3-1 lead. Nick Suzuki assisted on Caulfield's score, and Christian Dvorak and Juraj Slafkovsky picked up assists on Anderson's goal.

The Canadiens added to their lead at 18:40 in the second when Rem Pitlick made it 4-1, with assists going to Joel Edmundson and Jake Evans.

Seattle answered with one second left in the period, as Jared McCann scored with an assist from Andre Burakovsky.

Jake Allen made 31 saves for Montreal.

Though the Canadiens went into the final period with a two-goal lead, Allen wasn't about to relax.

''There's not many leads that are safe anymore,'' he said. ''It's not like it was 10 years ago when you're up three goals, you pretty much lock it down. This game is all about offense. You've just got to be able to manage the game better, play the game within the game, and I thought we did a better job in the third period tonight with that.''

The Kraken's two consecutive losses come on the heels of their franchise-record seven-game winning streak, which ended with a 5-1 home loss to Florida on Saturday. Seattle completed a 1-2 homestand, while Montreal went 2-2 on its four-game trip.

After a tough 7-6 loss Monday to Vancouver in overtime, Canadiens coach Martin St. Louis was happy his team bounced back.

''We found a way to stay in it, get a point, and then get back at it tonight,'' St. Louis said. ''Was it a perfect game plan for us? Absolutely not. We found a way, and that is what this league is all about.''

NOTES: Seattle forward Morgan Geekie returned to the ice after missing the past three games with an upper-body injury. . Caufield and Anderson's two second-period goals marked the fastest two goals on the road in franchise history.

Seattle: At the Washington Capitals on Friday. 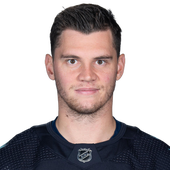