Martin Brodeur will reportedly stay with the Devils, agreeing to terms on a two-year, $9 million contract. 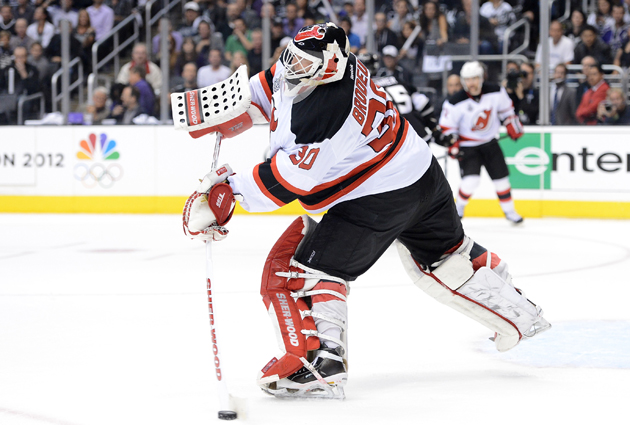 It seemed impossible to believe that Martin Brodeur could actually play for a team other than the New Jersey Devils during the 2012-13 season. But when he hired an agent and decided to test the open market this weekend that became a very real possibility.

In the end, however, Brodeur has decided to stay with the only team he's ever known, and the Devils coming up with a two-year, $9 million offer probably had a lot do to with that.

The club announced that Brodeur has re-signed on Monday, signing a deal that will all but assure he finishes his Hall of Fame career with the team he won three Stanley Cups with.

Along with the re-signing of Brodeur, the Devils also announced that they have re-signed his backup, Johan Hedberg, to a two-year deal keeping their goaltending duo from the past two seasons together. It will also give the Devils what is, once again, the oldest goaltending duo in the league as both players will be over the age of 39 at the start of the 2012-13 season.

Brodeur is not the player he once was, but he's coming off a great playoff run as he helped the Devils reach the Stanley Cup Final. It also would have been a rough PR hit for the Devils to potentially lose Brodeur and unrestricted free agent forward Zach Parise (and they very well still could lose him) in the same offseason.

When he hit the open market some of the rumored teams included the Florida Panthers, Toronto Maple Leafs and Chicago Blackhawks. None of the potential situations seemed to make as much sense for him as New Jersey, as the Devils were probably the only team that could (or were willing) to present him with that type of contract and all but guarantee him the full-time No. 1 job.

His $4.5 million cap hit for the next two seasons ties him with Rick DiPietro of the New York Islanders and Jonas Hiller of the Anaheim Ducks for the 11th largest cap hit in the NHL among goalies.

In 27 games last season Hedberg posted 17-7-2 record to go with a .918 save percentage. He has actually played some of his best hockey in recent years, posting the best save percentages of his career over the past three years.