Philadelphia's Jim Thome played four innings in the field of a minor-league game on Monday, his first action in the field since 2007. The Phillies hope the 41-year-old Thome can play 20 games at first this season while Ryan Howard is on the DL. 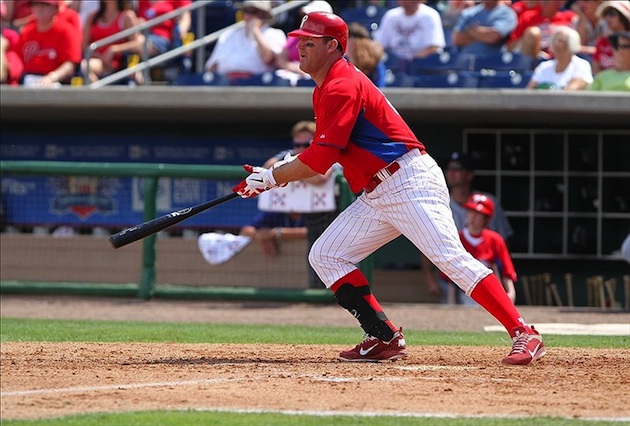 For the first time since 2007, Jim Thome needed a mitt to play in a baseball game.

The 41-year-old took to the field in a minor-league game at first base on Monday, his first game action in the field since June 13, 2007, when he played first for the White Sox -- coincidentally in an interleague game in Philadelphia. Since leaving the Phillies after the 2005 season, he's played just four games in the field. This season the Phillies are hoping to get 20 games out of him to fill in for the injured Ryan Howard.

"It felt good to be out there," Thome told reporters (via MLB.com). "It was just a lot of fun. It makes you really appreciate guys that win Gold Gloves and go out there, really good defensive players. Defense is something, for sure, for me personally I've always had to work real hard at. Hopefully we'll continue to do that and get better as we go."

Thome finished with five putouts and had two balls hit to him in his four innings. He misplayed the first ball hit to him, allowing a grounder to go into right field.

"It'll find you," Thome said of the play. "The ball always finds you when you haven't been out there in a while."

Thome said he's anxious to see how he feels on Tuesday, as he felt the effects of crouching, moving and holding runners. He's expect to play first in another minor-league game this week.

David Hale of DelawareOnline.com has video of Thome talking about his return to the field and video of the akwardness.