Kevin Millwood: 'It would have been stupid to stay out there'

Mariners pitcher Kevin Millwood said he hurt his groin on his penultimate pitch in his six no-hit innings of Seattle's six-pitcher combined no-hitter. 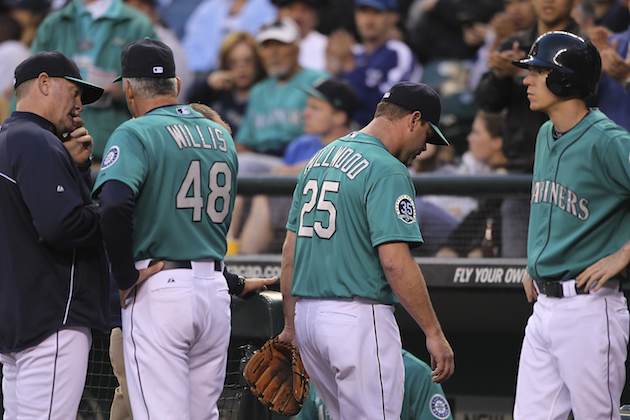 Mariners starter Kevin Millwood said he hurt his groin on his 67th pitch of the night -- and then struck out Tony Gwynn Jr. with his 68th and final pitch of the night. Millwood, who had a no-hitter through six innings, tried to go back out for the seventh inning, but after one warm-up pitch, he knew he was done.

"I couldn't push off," Millwood told reporters (via the Seattle Times). "It would have been stupid to stay out there."

Milwood was diagnosed with a strained right groin and his status will be updated on Saturday.

"He felt something in his groin, tried to go back out there, but couldn't even through a couple of pitches, so we got him out of there," Seattle manager Eric Wedge said in a post-game news conference.

"We knew it must be something serious to take him out of the game, he's a real gamer," Wilhelmsen told MLB Network after the game.

The 37-year-old Millwood, who threw a no-hitter for the Phillies in 2003, said it was tough for him to come out of the game with a no-hitter on the line.

"It was very frustrating. I was throwing the ball where I wanted to," Millwood told reporters (via video from the Seattle Times). "At the same time, it's still a team game and we're trying to win a ballgame, being selfish can't be a part of it."

Other notes on the no-hitter:

• It was the second no-hitter at Safeco Field this season, with Philip Humber's perfect game on April 21, coming against the Mariners.

• Brian Runge was the home-plate umpire for both Humber's perfect game and Friday's no-hitter.

• Shortstop Brendan Ryan was on the other side of a controversial play in Humber's perfect game. A pinch-hitter in that game, Ryan thought he checked his swing on Humber's final pitch, but Runge disagreed, calling him out for the final out of the game. Friday he got the call on a bang-bang play for the first out of the ninth inning. Again, Ryan was a substitute in the game. Ryan came in the game as a defensive replacement in the ninth inning. Another defensive replacement, Chone Figgins, had a key catch in the eighth inning to keep the no-hitter intact.

• In 1990, not only did Johnson throw a no-hitter for Seattle, the Mariners were no-hit by the Angels' Mark Langston and Mike Witt. This year the Mariners have a no-hitter and have been no-hit. The last team to accomplish that feat was the Rays in 2010. Edwin Jackson no-hit the Rays as a member of the Diamondbacks on June 25, 2010 and then the Rays' Matt Garza no-hit the Tigers on July 26, 2010.