After a mostly forgettable game featuring dozens of missed shots, turnovers, and fouls, Game 6 between the Celtics and Wizards turned into a classic over the final few minutes.

It was neck and neck down the stretch as the Wizards battled for their playoff lives, and after Al Horford (unintentionally?) banked in a shot with just under eight seconds to go, the Wiz were on life support. That's when John Wall stepped up with a clutch 3-pointer to give his squad the lead, and breathe plenty of life into the Verizon Center.

But with 3.5 seconds to go, the Celtics still had plenty of time to get a good look at a potential game-winner. It would appear that they didn't get all 3.5 of those seconds, however, due to a clock error. Let's break it down.

After calling a timeout to advance the ball past half court, the Celtics inbound the ball with 3.5 seconds to go.

Al Horford spots Kelly Olynyk inside against his nemesis, Kelly Oubre, and throws him the ball, as Olynyk tries to seal Oubre. The Wizards forward makes contact with Olynyk, fouling him basically right when the ball is touched, with 3.5 seconds still left on the clock. 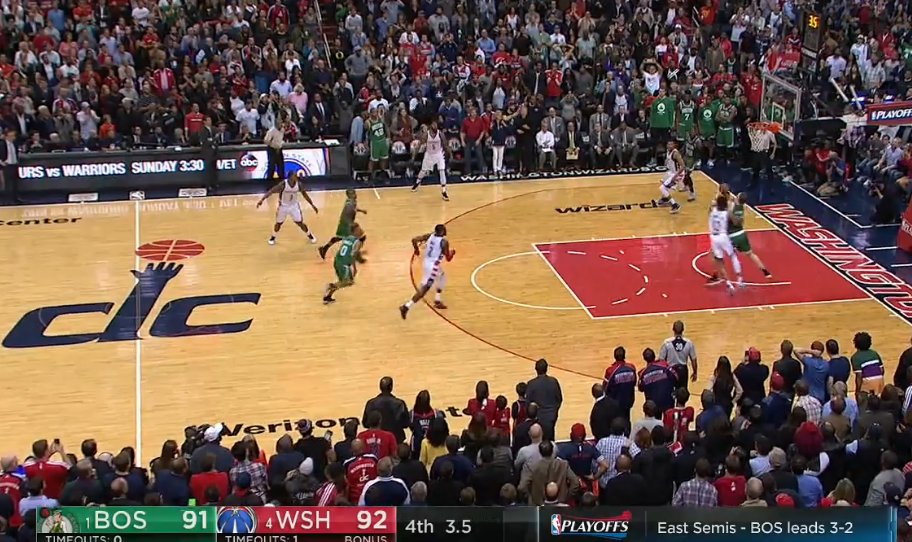 A split second later, the ref realizes the foul, blows his whistle, and raises his arm to indicate a foul with about 2.8 seconds to go. Obviously, due to human error, things aren't going to be exact in these situations, especially when we're talking about tenths of a second. 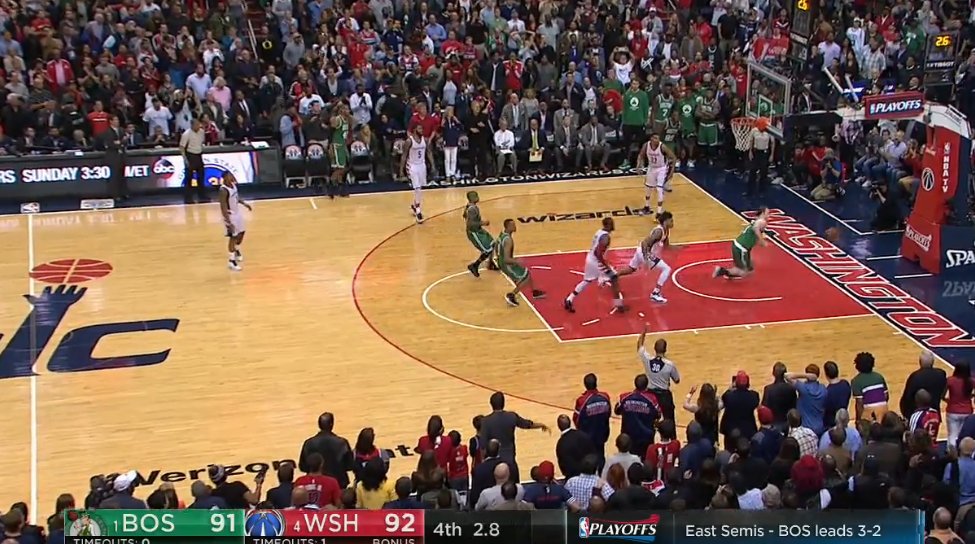 Still, the ref has his arm raised at 2.8, yet the clock runs all the way down to 1.7 seconds before stopping for good. 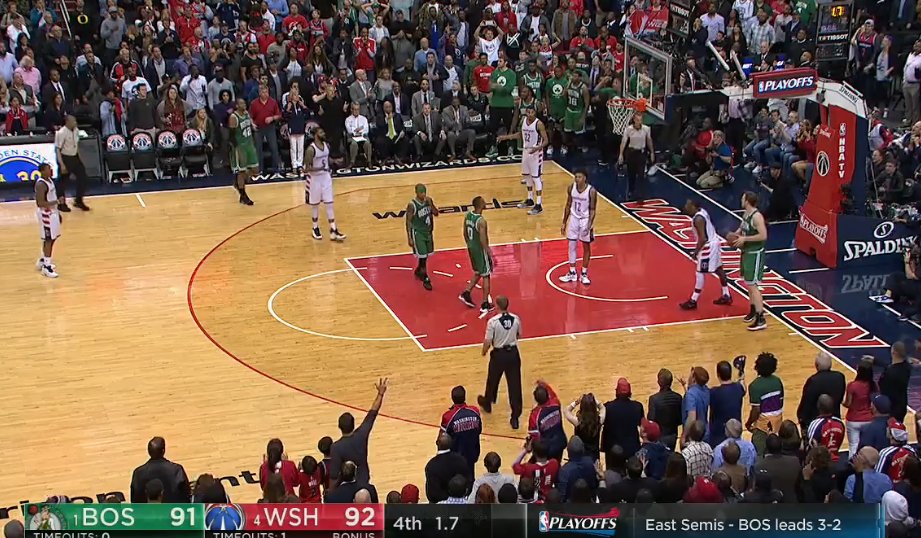 So, to recap: the foul occurred with 3.5 seconds, the ref had his arm raised at 2.8 seconds, yet the clock ran all the way down to 1.7 seconds, which is how much time remained when the Celtics inbounded the ball for the second time.

Here's the play in full.

Now, of course, the clock isn't going to stop precisely on the foul, as the ref has to realize the foul, blow his whistle and raise his arm, and the clock operator has to stop the clock. That said, isn't that what replay is for? We see situations all the time where officials convene for what feels like 10 minutes to make sure the time on the clock is right. They didn't even look at this one. Still, even accounting for all that, just on your basic eye test there should have been more than 1.7 seconds remaining when the Celtics inbounded the ball.

Let's say there were somewhere between 2.8 and 2.5 seconds remaining instead, would this have mattered? Here's the final shot, as Thomas puts up a heave over Markieff Morris.

On this specific shot, no, an extra second or so wouldn't have changed anything, as Thomas got the look off in plenty of time. However, with nearly three seconds remaining, the Celtics' strategy probably changes. Instead of just trying to get the ball inbounds and get off a shot as soon as possible like they did with 1.7 on the clock, you have a chance to make more of a basketball play.

You could run a little handoff action, perhaps pump fake your way into a foul or a clean look, or make a quick dribble move, any of which give you a better chance than a simple heave. Does that mean the Celtics definitely would have scored? No, absolutely not.

The most likely outcome in that situation is always a Wizards win, however, with everything they review these days, it seems strange that they didn't take a look at the clock situation in the closing seconds of a one-point Game 6.

Lakers get biggest win of season over Jazz

Cavs get fifth straight win thanks to elite defense