John Tavares had a goal and two assists, Calle Jarnkrok and Mark Giordano also scored and Mitch Marner had two assists to push his points streak to 12.

''Just doing me, like usual,'' said Marner, who had points in 13 straight outings last season. ''Trying to buzz out there, trying to be the best I can be. Lucky enough to have some great people to put some pucks in the net and find me in spots that I can do the same.''

''Defensively, I thought we were exceptional,'' Toronto coach Sheldon Keefe said. ''Between how we defended and then how Matt Murray played in goal, we were a tough team to beat.''

Marner has three goals and 14 assists during his points streak.

''His hockey sense is just off the charts,'' Murray said. ''He's unbelievable.''

Alex Tuch and Casey Mittelstadt scored for Buffalo. The Sabres fell to 7-11-0. They haven't earned a point in the standings since Nov. 2.

''It boils down to compete,'' Sabres coach Don Granato said. ''We didn't have enough guys competing hard enough at the start. That was the difference.''

Ukko-Pekka Luukkonen stopped 18 shots for the Sabres in his first start after being recalled from the AHL with Eric Comrie sidelined by a lower-body injury.

Buffalo claimed center Tyson Jost off waivers from Minnesota. The 24-year-old Jost, selected 10th overall in 2016 by Colorado, has three assists in 12 games this season.

Sabres: At Montreal on Tuesday night. 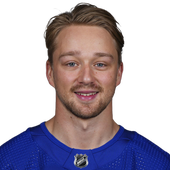