OTTAWA, Ontario (AP) Akira Schmid made 25 saves and the New Jersey Devils beat the Ottawa Senators 5-1 on Saturday for their 12th straight victory.

Yegor Sharangovich and Michael McLeod each had a goal and an assist, and Erik Haula, Nathan Bastian and Jesper Boqvist also scored for New Jersey. The Devils are one win away from matching the longest streak in franchise history, set Feb. 26-March 23, 2001.

The Devils jumped out to a 3-0 lead early in the second period, and then pulled away again after the Senators got on the scoreboard later in the middle period.

''We were just resilient,'' Haula said. ''There were a couple holes in our game, I thought, where we got a little bit comfortable and that's when they kind of took it to us a little bit and got some chances, but overall, good for Schmid, great game from him, and 12 in a row, we've got to feel good about this one.''

Derick Brassard scored for the Senators. Anton Forsberg started the game but was pulled early in the second period after allowing the third goal on 18 shots. Cam Talbot finished the game allowing one goal on 17 shots.

Ottawa continued to struggle, having won just twice in its last 11 games (2-8-1). Late in the game, there was a faint chant of ''Fire D.J.!'' Fans have been calling for the dismissal of coach D.J. Smith the last couple of weeks.

''It's nobody to blame but ourselves, the players,'' Senators captain Brady Tkachuk said. ''We just weren't ready to play today and that's my job to get everybody ready and I'm sick and tired of seeing all this negativity on social media and all that. It's not one person, it's the group in here that needs to figure it out.''

Haula opened the scoring with a power-play goal early in the first period for his first of the season. Bastian made it 2-0 late in the first, jumping on a rebound out front.

The Devils didn't let up, making it 3-0 early in the second when Boqvist was able to grab a puck out front, putting an end to Forsberg's afternoon.

''I thought tonight was a total team game,'' New Jersey coach Lindy Ruff said. ''We got production, we got a key short-handed goal from (Yegor) Sharangovich, but all four lines were in on it. I thought our defense played well and, again, our goaltender made some big saves at key times.''

Brassard got the Senators on the board late in the period, but the Devils came right back, with Sharangovich scoring his short-handed goal with 34 seconds remaining in the period.

Ottawa pulled the goalie with 4:51 remaining in the third, but the Devils made them pay for it with McLeod scoring an empty-netter with 2 1/2 minutes to go.

Devils forward Dawson Mercer is one game away from his 100th in the NHL. He will be the fifth player in franchise history to play his first 100 games consecutively.

NOTES: The Senators had not lost to the Devils in regulation at home since Dec. 30, 2015 - going 5-0-3 in eight games since. ... Ottawa D Artem Zub returned to the lineup after missing the last eight games with an upper-body injury. ... The Devils are a perfect 8-0-0 against Canadian opponents this season. Saturday's matchup was the second of three against the Senators. ... Devils captain Nico Hischier has six goals and six assists over his last 10 games.

Senators: At the San Jose Sharks on Monday night.

NJDevils
OTTSenators
STARS OF THE GAME 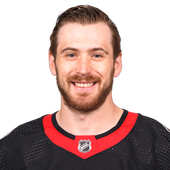