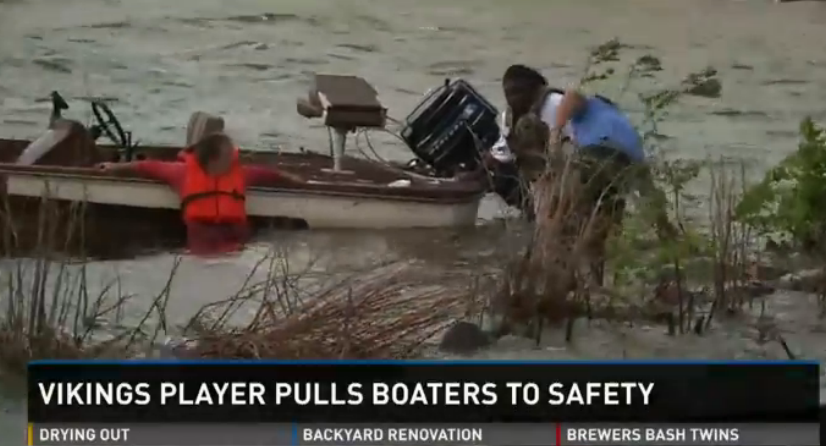 A local news station spotted Edward and Crystal Alexis struggling with their new boat in rough waters on the lake and called 911. Before the police could arrive to help, Greenway waded out in the water and helped the couple pull their boat to safety away from rough waters and a dangerous spillway.

"We were looking at all the beautiful houses and all of the sudden the steering wheel wouldn't turn and we were going in circles," Crystal Alexis said.

Greenway, who must have a house on the lake, hustled to the waters and saved the couple from potential disaster.

"So, I just ran down, of course with my two little girls following behind me, trying to stay out of the way, and I figured I'd help them out. It looked like it was dangerous," Greenway said.

Greenway eventually drove the couple, who bought the boat the day before they went on the lake, to pick up their car and boat.

The couple didn't know that Greenway was the Vikings player while they were being saved but Edward had a pretty priceless reaction after being told and then asked if he was a Vikings fan.

Eagles' Slay: Packers have a 'bright future' with Love

Here's why Burrow has held his own against Mahomes

Five crazy facts about Bo Jackson on his 60th birthday