The NBA has rescinded its suspension of the Dallas Mavericks' PA announcer for criticizing the referees on Twitter following a recent loss.

UPDATE: The league has rescinded the two-game suspension for the Mavs' PA announcer Sean Heath, instead installing a $25,000 fine for the team, according to ESPN.com.

The Dallas Mavericks need every win they can get at the end of this season, as they are still battling it out with the Phoenix Suns and Memphis Grizzlies for one of the final two playoff spots in the Western Conference. Back on April 1, they lost a tough overtime game to the Golden State Warriors, that included a missed goal tending call in the final moments of the overtime period. Jermaine O'Neal goal tended a shot by Monta Ellis, which wasn't called, and then Stephen Curry dropped the winning shot on the next possesion.

The Mavericks were visibly upset with the lack of a goal tending call against O'Neal, but I'm not sure anybody was as upset as the American Airlines Center PA announcer for Mavs games. Sean Heath went on a mini Twitter tirade against the NBA and the officials working the game, which included the NBA's Twitter account in some of the tweets. The rant has reportedly earned Heath a two-game suspension from the league for publicly criticizing the officials. From ESPN Dallas:

Heath, who declined to comment, wrote a series of tweets regarding the officiating after the Mavs' 122-120 overtime loss to the Golden State Warriors on April 1.

What could Heath have possibly said to earn himself a two-game suspension, which is unheard of for PA announcers in the NBA? Here are four of his tweets from after the loss: 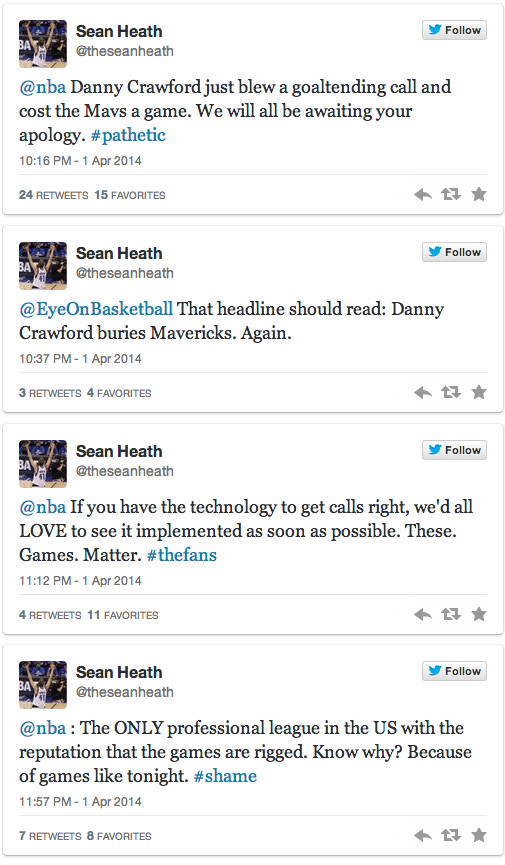 Naming Danny Crawford, a referee some of the Mavericks' fan base believes has it in for the team or believes just happens to officiate poorly against the Mavs, twice in the tweets probably wasn't a good thing. Including the NBA on a few of the tweets definitely didn't help the situation. Telling the NBA it's the only professional league in this country with a reputation that the games are rigged was probably the clincher on this one.

Surprisingly, there weren't tweets criticizing Monta Ellis for shooting with 11 seconds left on the shot clock and 16 seconds left on the game clock in a tie game. Nor were there tweets criticizing Vince Carter for not trapping Curry hard to force the ball out of his hands and into the hands of 40.0 percent shooter Draymond Green. Allowing 57 percent from the field and 48 percent from 3-point range to the Warriors in this game was absolved as well.

The Mavericks currently sit eighth in the Western Conference after a Thursday loss to the San Antonio Spurs, one game ahead but tied in the loss column with the Grizzlies. Dallas has two games left this season with one coming against the Suns and then closing out the season against the Grizzlies.

Draymond says Grizzlies' Morant reminds him of himself

Which traded future picks hold the most value?

Heat likely to raise No. 6 for Bill Russell and LeBron