The man who started the trend of fake spiking was Dan Marino in 1994.

Every once in a while, we'll see an NFL quarterback pull off a fake spike when the clock is winding down and the defense isn't expecting it, and that's usually when we say to ourselves, "Geez, why don't people do that more often?"

After all, it worked last Sunday for Aaron Rodgers, when he used the fake spike to complete a 10-yard pass to Davante Adams, which set up the winning touchdown pass that allowed the Packers to survive the Dolphins.

It was an awesome play, but maybe not quite as cool as this one by Matthew Stafford. But the fakes don't always work, and of course, none of them can compare to the original -- which occurred 20 years ago.

You probably recall it, but if not, here's your portal into the past.

Here was the New York Times' take on it the next day:

There were no secrets today. The largest home crowd in Jets history knew what would be happening in those wild final minutes, and so did the Jets. Dan Marino would be winging that ball.

So tens of thousands of fans stood screaming at Giants Stadium, trying to outroar Dan Marino's throaty commands to his Dolphins. The fans, the pass rush, it was all the same to Marino, as he stared at Mark Ingram and barked, "Clock! Clock! Clock!"

Ingram knew, but the rookie cornerback Aaron Glenn didn't. Marino, the man with the golden arm, was about to fool the Jets. He made a spiking motion. For a second, Glenn bit and held up as the ball was snapped and Ingram headed for the right side of the end zone. Too late, Glenn chased Ingram.

By then, the ball was headed to Ingram, who grasped it for his fourth touchdown of the day, silencing the stadium and devastating the Jets with just 22 seconds to play. A game that the Jets had led by 17-0, and then by 24-6, had somehow turned into a 28-24 defeat. And instead of being 7-5 and tied for first place in the American Conference East, the Jets are 6-6 and again full of doubts.

After the game, Jets coach Pete Carroll -- who would be fired after the season -- called it "a staggering defeat."

So, how did all this happen? As recounted by the Sun Sentinel in 2008, backup quarterback Bernie Kosar was actually the man to import the play into the Dolphins imagination. And in fact, it was Kosar who was speaking into Marino's helmet headset at the time, telling him he should pretend to spike the ball.

Marino sold it by yelling "Clock! Clock! Clock!" and making the spike motion with his hand -- which were probably two big reasons why the Jets were so flim-flammed. 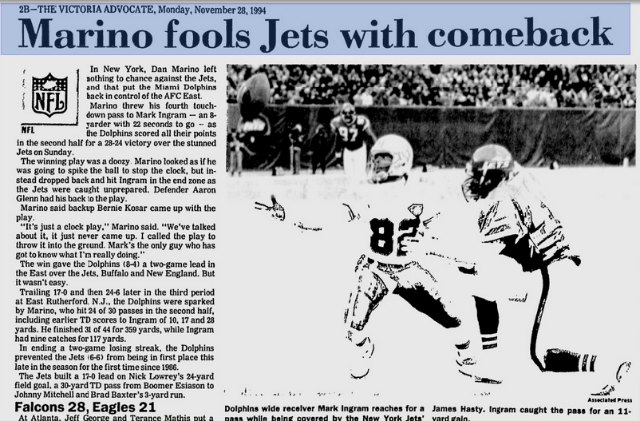 Rodgers on fake spike: I did watch Dan Marino play years ago, and thought it was brilliant. Fun to be able to do that at House Marino Built.

OBJ claims he tore his ACL before Super Bowl

Favre believes Adams will take step back without Aaron