''I saw a random stat that it's been a while since the Flames won a season opener, so I'm happy we can get that off our backs and we can just carry on another 81 games here,'' new Flames defenseman MacKenzie Weegar said.

''For sure the energy level wasn't where it needed to be,'' Colorado coach Jared Bednar said. ''It wasn't where it was last night. Give Calgary credit. I thought they did what they needed to do to make it tough on us.''

Weegar had a pair of assists. He joined Calgary's other offseason acquisitions - Jonathan Huberdeau, Nazem Kadri and Kevin Rooney - in making their regular-season debuts for the Flames. Kadri, who had an assist, signed as a free agent with Calgary in August after three seasons with Colorado.

Kadri received his championship ring from the Avalanche after the game.

''A win and getting this, that's the cherry on top, that's for sure,'' Kadri said. ''It was a bit of a whirlwind of a day. You just try to compose yourself as best as possible. A lot of things are running through your head.

''Happy we were able to play a half-decent game and get a win against a great team and this just makes it even better.''

Avalanche: At Minnesota on Monday night to complete a two-game trip.

Flames: At Edmonton on Saturday night. 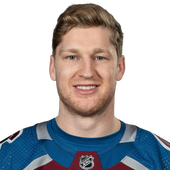