The victory marked the fourth time in Vegas' first six seasons in the NHL it opened 2-0-0, while Chicago (0-2-0) has now lost its first two games in four straight seasons.

Thompson, making just his 22nd NHL appearance, got his second career shutout. It was his third time facing the Blackhawks and he improved to 2-0-1 against them.

''It was good, it was a lot of fun,'' Thompson said. ''You know, good to see Paul get the game-winner and overall I'm just happy with the two points.''

Alex Stalock was excellent in net for Chicago, finishing with 36 saves in his first start of the season.

Both goalies were stellar on the penalty kill, each making six saves in power-play situations. Chicago was 0 for 2 with the man advantage while Vegas was 0 for 3.

''Both goalies were the stars of the show tonight,'' Vegas coach Bruce Cassidy said.

The Blackhawks didn't look like a team playing the second of back-to-back nights after opening their season in Denver on Wednesday. Chicago's aggressiveness on the forecheck allowed the Blackhawks to disrupt any Knights' attempt to move in transition during the opening period, as it played the high-flying Golden Knights rather evenly, outshooting Vegas 10-9 in the first period.

Vegas, which won its season-opener Tuesday in Los Angeles, got stellar play from Thompson, who came up with timely saves near the end of the first during a penalty-kill, preserving a scoreless game.

''It was good to get it in early,'' Thompson said of Chicago's early surge. ''Seeing a couple shots early on helps the confidence and helps you feel the game and they had some weird bounces that led to some scoring chances for them, but luckily was able to keep the puck out tonight.''

Vegas struck first when a rested Cotter came out of the box moments after the Golden Knights killed a penalty, broke into the zone on a 2-on-1 and opted to wrist the shot on his own past Stalock short side at 8:44 of the second.

It was the fourth 2-on-1 for Vegas in the period, with Cotter finally breaking through for the Knights with his first goal of the season. He had two goals in seven games last season.

''It's rewarding, it's great, it's a good feeling, especially the first one's out of the way,'' Cotter said.

Vegas finished the second outshooting Chicago 18-8 and then had a 10-9 advantage in the third.

''The compete level was really high tonight from everybody, the goaltender out, and we're pretty happy with a lot of things we saw on the ice. Unfortunate we just couldn't get it crossed that line,'' Chicago coach Luke Richardson said. ''Thought their goalie played well really early, and at the end, there was a couple chances that we had. I think in the middle part of the game we didn't get a lot to the net, but we still competed and played much better so it was a step forward for us.''

NOTES: Both coaches - Cassidy and Richardson - are in their first season with their respective clubs. ... Vegas veteran Phil Kessel continued his path toward the league's Iron Man mark, having appeared in 984 consecutive games, the longest active streak and five away from tying Keith Yandle's career record of 989. ... Vegas D Zach Whitecloud earned his first assist of the season on Cotter's goal.

Blackhawks: At San Jose on Saturday.

Golden Knights: At Seattle on Saturday. 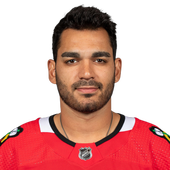