PHILADELPHIA (AP) John Tortorella had just won his first game with Philadelphia when an old friend stopped by outside the locker room to congratulate him.

Welcome back to the league, Torts.

He got more than a win and some well-wishes from the commish - the Flyers awarded Tortorella the game puck.

Konecny and Morgan Frost scored 23 seconds apart in the second period to help Philadelphia beat the New Jersey Devils 5-2 and made Tortorella a winner in his Flyers debut Thursday night.

Tortorella, who won a Stanley Cup with Tampa Bay in 2004, was the big offseason splash for a team coming off a last-place finish in the Metropolitan Division. Tortorella promised no quick fixes for a franchise that has bottomed out and a team widely projected as among the worst in the NHL this season.

On opening night, Tortorella turned the Flyers into winners.

''I didn't have any jitters. I was full of anticipation just to play,'' Tortorella said.

Attendance has sagged in recent seasons, but the Flyers played to a near full-house and famed ring announcer Michael Buffer dropped his ''Let's get ready to rumble!'' catchphrase to energize the crowd. Phillies manager Rob Thomson struck the game-opening drum and even Hall of Famer Eric Lindros was back in the house. For a team without bona fide playoff prospects, the Flyers tried to create a Game 1 feel in the season opener.

Konecny and Frost also scored in the third period. Wade Allison had a first-period goal and Carter Hart stopped 34 shots.

''We were hard to play against,'' Hart said. ''We were in a lot of lanes on pucks, blocking shots.''

Tortorella, who got a rousing ovation during pregame festivities, said the immediate goal was to make sure the Flyers are hard to play against and would earn respect from the rest of the NHL. With rookies or veterans, Tortorella said he won't play favorites within his own team to get them to that point.

''I'm not going to hold hands and I won't,'' Tortorella said.

This game wasn't exactly a marquee matchup on the schedule. The Devils posted a 27-46-9 record last season and finished with 63 points, the third-worst record in the Eastern Conference. They haven't made the playoff since 2018.

Alexander Holtz gave the Devils a 1-0 lead 8:01 into the game with his first career NHL goal and Allison tied it 23 seconds later -- the same span of time between Konecny and Frost's goals against Mackenzie Blackwood that put the Flyers ahead 3-1.

Damon Severson scored in the third for the Devils to make it 4-2. Frost's second goal was an empty-netter.

''We didn't play well enough defensively,'' Devils coach Lindy Ruff said. ''We got on the wrong side of the puck a couple of times. We know we have to play better defensively. That's our focus.''

Bettman said the league would not follow other professional sports leagues and move away from the vague - and often misleading - upper or lower body designations for injuries.

''Our players sometimes play a little hurt,'' he said. ''That is something that they take great pride in. I don't want to subject them to any additional injury.''

Bettman also said the league wasn't necessarily concerned that interest in the Flyers has waned as the team is projected as one of the worst ones in the league.

''I know that ownership is committed and passionate,'' he said. ''They always spend to the cap. And I assure you they want to be a competitive team as much as the most passionate fans of the Flyers.''

The Flyers signed D Travis Sanheim to an eight-year, $50 million contract extension. The 26-year-old Sanheim had seven goals and 31 points last season. The 6-foot-4, 208-pounder from Elkhorn, Manitoba, led the Flyers with a plus-9 rating, ranked second in average time on ice (22:58) and blocked shots. Philadelphia's first-round pick in the 2014 draft, Sanheim has 116 points in 335 career games over five seasons.

''To be drafted not only by Philly, but in Philly, and now to sign a long-term deal here, it means a lot,'' Sanheim said. ''I love this city, love the fan base and I'm excited to turn this around and get things going. There's no better place to win than Philly.''

The Devils return to New Jersey for their home opener Saturday against Detroit.

The Flyers play at home Saturday - at about the same time the Phillies host Game 4 of the NLDS across the street - against Vancouver.

NJDevils
PHIFlyers
STARS OF THE GAME 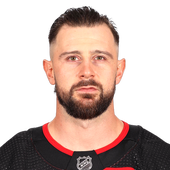