Eetu Luostarinen scored in the second period and Matthew Tkachuk added an empty-netter late in the third for Florida. The Panthers won their season opener a year after winning their first eight games and starting 10-0-1.

''It's a hard game and it's a grinding game and I thought, as the game went on, we got better and better,'' Maurice said. ''The goaltender was really good when he needed to be. We didn't score on the power play but we had some really good looks there. I like the penalty-kill the first one and the third one are just really strong.''

Noah Dobson scored for the Islanders and Ilya Sorokin made 26 saves. New York, starting the season with four straight at home a year after a franchise-record 13-game season-opening road trip while construction of UBS Arena finished, lost its home opener for the second straight year.

''We created a lot of chances, moved the puck well, got big saves from Ilya when we needed to,'' Islanders forward Casey Cizikas said. ''We got to regroup here, realize the things that we did well and carry that into the next one on Saturday.''

Hornqvist gave the Panthers a 2-1 lead at 3:43 of the third, just 30 seconds after Dobson had tied the score with a power-play goal. The Swedish forward for Florida banked a wraparound off the skate of Sorokin.

Tkachuk, making his debut with the Panthers, made it a two-goal lead with 1:15 remaining.

''They've been building a culture over the last few years and for me to just easily step into that and I feel like I've been playing for 10 years with these guys,'' Tkachuk said of his new teammates. ''It's a really big credit to them. I'm just super lucky.''

Luostarinen opened the scoring with a deflection with 7:15 left in the second period. Radko Gudas tossed a soft wrist shot from the point and the Finnish forward was able to redirect the puck past Sorokin.

One of the best Islanders scoring chances came when Cizikas set up Nikita Soshnikov midway through the second for a short-handed chance. However, Bobrovsky played the 2-on-1 aggressively and denied the opportunity. Cizikas created another short-handed chance for himself in the third period but batted a puck wide of the net.

''Whenever it presents itself, we try to get up the ice,'' new Islanders coach Lane Lambert said of the team's aggressive mentality while short-handed. ''Late in the second period, when they had their power play, We backed off a little bit, they had a couple of entries and a couple of scoring opportunities. ... It's a situational type of thing, but certainly we want to be aggressive up the ice.''

Jean-Gabriel Pageau kept the game at 0-0 with a masterful defensive play when he cleared a puck that fluttered past Sorokin early in the second period.

Tkachuk scored and recorded 22:43 of ice time in his first game with the Panthers after being acquired in a blockbuster trade this summer. The Panthers also gave Tkachuk an eight-year, $76 million extension after getting him from Calgary in exchange for Jonathan Huberdeau and MacKenzie Weegar.

Maurice made his debut with Florida after stepping down as Winnipeg coach last season. Maurice came in with a record of 315-223-62 in eight-plus seasons while guiding his team to the postseason five times. ... Lambert made his debut as a head coach after replacing the fired Barry Trotz in the offseason.

The Islanders are celebrating their 50th anniversary since joining the NHL at the beginning of the 1972-73 season. The first captain of the franchise, Ed Westfall, dropped the puck for a ceremonial opening faceoff. Four-time Stanley Cup Champion John Tonelli also sounded a siren alongside actor and Islanders fan Ralph Macchio to engage the crowd prior to the opening faceoff. In addition, Islanders co-owner Jon Ledecky rang the opening bell at the New York Stock Exchange Thursday morning. Ledecky was joined by Jackpocket chief financial officer Sean Siuda. Jackpocket is the Islanders' home helmet sponsor and the company's name will appear on the helmet for all home games. Also, the Empire State Building was lit up in Orange and Blue for the Islanders.

The Islanders were without hard-hitting forward Cal Clutterbuck, who was placed on injured reserve prior to the season and is eligible to return as soon as he is healthy. Clutterbuck underwent shoulder surgery in March of last season shortly after signing a two-year extension. ... New York scratched forwards Ross Johnston and Oliver Wahlstrom, and defenseman Sebastian Aho.

Panthers: At Buffalo on Saturday night in the second of a season-opening three-game trip.

Islanders: Host Anaheim on Saturday night in the second of a season-opening four-game homestand.

FLAPanthers
NYIIslanders
STARS OF THE GAME 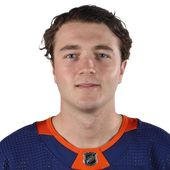