LOS ANGELES (AP) Brandon Tanev scored the go-ahead goal early in the second period and the Seattle Kraken rebounded from an opening loss to beat the Los Angeles Kings 4-1 on Thursday night.

Seattle bounced back from a 5-4 overtime loss to the Anaheim Ducks on Wednesday night, when the Kraken squandered a two-goal lead in the third period.

''We played hard for 60 minutes,'' Seattle coach Dave Hakstol said. ''In every way we were better with the puck, we were smarter and a lot of the areas that we wanted to address we did. But biggest thing is we just played together as a group.''

The Kings have dropped their first two games. Throughout the preseason, coach Todd McLellan preached getting off to a good start after Los Angeles went 1-5-1 in its first six games last year before rebounding and making the playoffs.

''Well, it's a losing streak to start the season already 'cause we're at two and haven't put one on the board yet,'' a philosophical McLellan said. ''You get to recreate yourself every year, and the reference point we had after Game 1 was last year. Now we have six periods in the bag, and much better defensively today. Gave up far fewer opportunities than we did against Vegas. Still many things to work on.''

Tanev, who had nine goals and 15 points in 30 games last season before suffering a season-ending knee injury, got his first goal in 11 career games against the Kings at 6:08 of the second period. He won possession of the puck in the corner, got past Adrian Kempe and then put a wrist shot above Quick's shoulder on the short side.

''They play a difficult system and a trap that's tough to break. But I think when the simplicity of the game of is getting pucks in, forechecking and being physical it makes it easier,'' Tanev said. ''I think when you're out there with guys that understand the way we need to play it makes the game easier and you just read off each other and communicate try to make things easy.''

Seven minutes later, Wennberg gave the Kraken a two-goal advantage when he grabbed Matty Beniers' pass at the front of the net and put it past Quick.

It was tied 1-1 after 20 minutes after both teams scored on the power play. Seattle scored first at 5:21 Schwartz put in a rebound after Quick made a pad save on Jordan Eberle's shot from the slot. Two minutes later, Iafallo evened it on a wraparound after the Kings won the faceoff.

Beniers had an assist and became the sixth player in the NHL's modern era (since 1943-44) to find the score sheet in at least 11 of his first 12 career games. He joins Jonathan Toews, Rob Gaudreau, Teemu Selanne, Dimitri Kvartalnov and Joe Sakic. Kvartalnov and Sakic had a point in their first 12 games.

Beniers, the second overall pick in the 2021 draft, has 12 points (four goals, eight assists) in his first 12 games.

Los Angeles defenseman Brandt Clarke made his NHL debut. The 19-year old Clarke, the eighth overall pick in the 2021 draft, is the 32nd teenager to play for the Kings and the fourth to make his debut in Todd McLellan's four seasons as coach. The others were Tobias Bjornfot, Arthur Kaliyev and Quinton Byfield.

Kraken: Have their home opener against the Vegas Golden Knights on Saturday night.

Kings: Begin a five-game trip against Minnesota on Saturday night. Kevin Fiala, who was traded to Los Angeles during the offseason, faces his former team for the first time.

SEAKraken
LAKings
STARS OF THE GAME 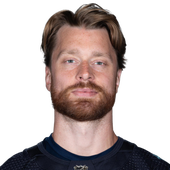