Five Mariner relievers came in after Kevin Millwood left after six innings to give the Mariners the 10th combined no-hitter in Major League Baseball history. Millwood had a no-hitter through six innings and came out to warm up for the seventh, but after just one warm-up pitch, he took himself out of the game. 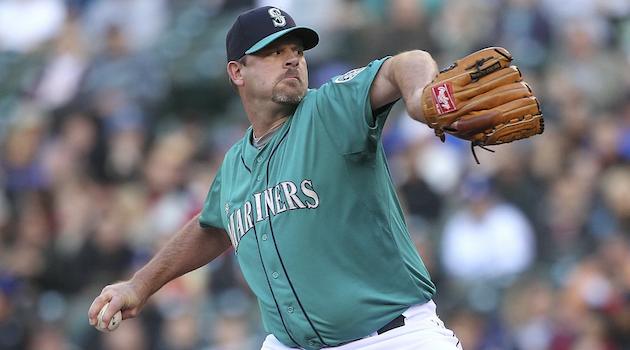 Six Mariner pitchers combined for a no-hitter in a 1-0 victory over the Dodgers after Kevin Millwood left with a strained right groin before the seventh inning.

Millwood came on to pitch the seventh inning, but after one warm-up pitch, he called out out the trainer and took himself out of the game. Five more pitchers -- Charlie Furbush, Stephen Pryor, Lucas Luetge, Brandon League and Tom Wilhelmsen -- came in for the final three innings.

Wilhelmsen came in for the ninth and shortstop Brendan Ryan, in the ninth for defensive purposes, made a good play on a soft grounder by Dee Gordon for the first out of the inning. He then got a liner to Ryan and a grounder to second to finish off the 10th combined no-hitter in Major League Baseball history.

For the seventh inning, Millwood was replaced by Charlie Furbush, who recorded two outs before Stephen Pryor came in to strike out Juan Rivera for the third out of the inning, keeping the no-hitter intact. Pryor walked the first two batters in the eighth inning, before Lucas Luetge came in to get James Loney on a sacrifice bunt. He was replaced by right-hander Brandon League. Chone Figgins, a defensive replacement, made a nice catch to retire A.J. Ellis for the second out, and was able to keep the runners at second and third. League then struck out Tony Gwynn Jr. to end the inning.

Millwood, 37, had thrown just 68 pitches through six hitless innings, striking out six and walking one.

"He was spot-on the whole night and we knew it had to be pretty big for him to take himself out of the game, he's a gamer," Wilhelmsen told MLB Network after the game.

Furbush retired the first batter he faced before letting Elian Herrera reach second on his own throwing error. He struck out Andre Ethier before being replaced by the right-handed Pryor.

Los Angeles' Nate Eovaldi threw six scoreless innings for the Dodgers before giving way to lefty Scott Elbert, who gave up the lead when Kyle Seager singled in Ichiro Suzuki in the seventh.

Millwood threw a no-hitter in 2003 when he was with the Phillies. In his first season in Seattle, the right-hander entered Friday's game 3-5 with a 3.90 ERA.

The last combined no-hitter was June 11, 2003 when six Astros combined for a no-hitter against the Yankees.

Batting Around: Best team in the National League?