Pete Prisco goes to the telestrator to break down film from Week 15's NFL action and comes out of it with several observations. This week, take a look at how the Giants failed to stop Matt Ryan and the Falcons, and see why playing man coverage against Russell Wilson is risky.

What is wrong with the Giants defense? How about the pass rush?

Or lack of one.

When the Giants won the Super Bowl twice in the past five years, it was the pass rush that keyed them on the defensive side of the football. But that pass rush isn't what many expected it to be this season.

Jason Pierre-Paul, my preseason pick to be the NFL Defensive Player of the Year, leads the Giants with 6 1/2 sacks, which ties him for 33rd in the league. As a team, the Giants are 12th in sacks per pass play, which isn't bad, but they are 26th in third-down efficiency, which is a reflection of their lack of pass rush. The Giants have 32 sacks as a team.

Pierre-Paul was expected to have double-digits in sacks, but the biggest disappointment has been Justin Tuck. Before the season, he was on many of the top-100 player lists. He won't be next year. He has three sacks and hasn't done a lot aside from a game or two.

Take a look at some of the screen shots below that show how well the Falcons handled the Giants front last week.

The first pictures show a 10-yard crossing-route completion to Harry Douglas. That play takes time. The Giants rushed four in their speed look, which was four defensive ends lined up with hands down. It was Pierre-Paul and Osi Umenyiora on the outside and Justin Tuck and Mathias Kiwanuka inside. Umenyiora, blue circle on the right side, got some pressure, but Sam Baker just took him behind quarterback Matt Ryan.  The others got nowhere. That enabled Ryan to complete the throw to a crossing Douglas. 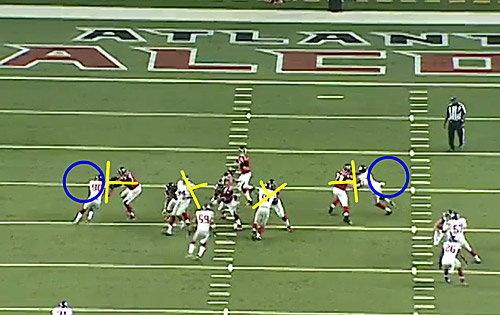 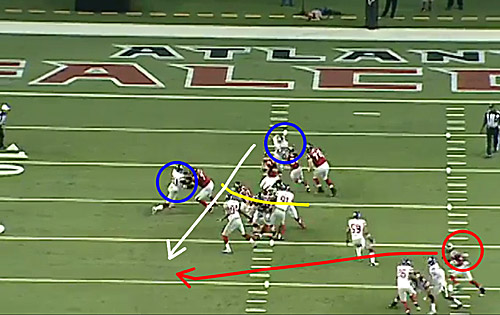 Here's the 40-yard touchdown pass from Ryan to Julio Jones. The Giants actually brought five on the play, with linebacker Keith Rivers joining the four down linemen as rushers. Fullback Mike Cox picked up Rivers, and the other four players were also handled.  Right tackle Tyson Clabo did a nice job on Pierre-Paul. You can see that Ryan had a nice pocket in front of him to step in and make his throw. 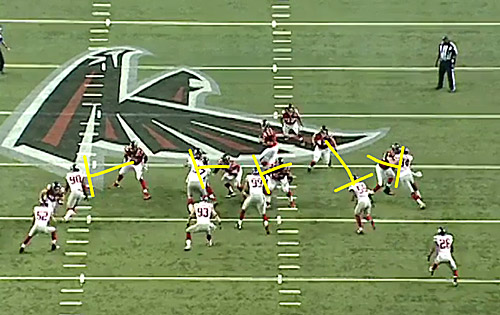 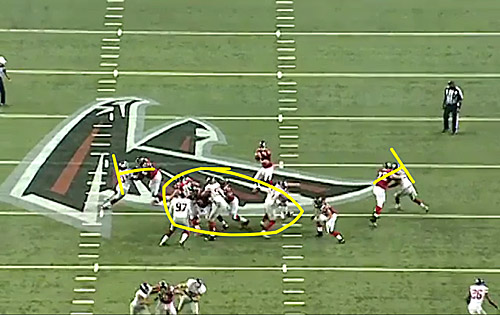 The Giants had one sack against the Falcons, and that was by defensive tackle Chris Canty. That means all of the supposed speed edge rushers were shut out. That can't happen in the next two games, or the Giants just might miss out on the playoffs.


Rolling the dice against Wilson

In After Further Review on Thursday, I mentioned how dangerous it can be to play man coverage against Seattle's Russell Wilson. That's because the defensive backs turn their backs to him, allowing him the chance to make a big play with his feet. Here's a look at his 25-yard touchdown run against the Bills last week.

The Bills had man coverage on five receivers with safety Jarius Byrd in the short middle as a freelancer/spy with George Wilson behind him. But when Wilson took off to the left side, Byrd had already made a move to receiver in the middle of the field. That allowed Wilson to get to the left and run up the field for an easy 25-yard touchdown run. You can see the defensive backs running with their receivers, oblivious to the fact that Wilson was scrambling for a big play. 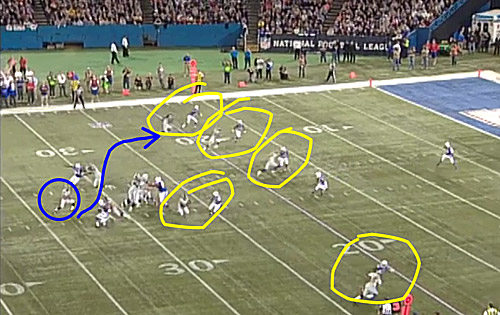 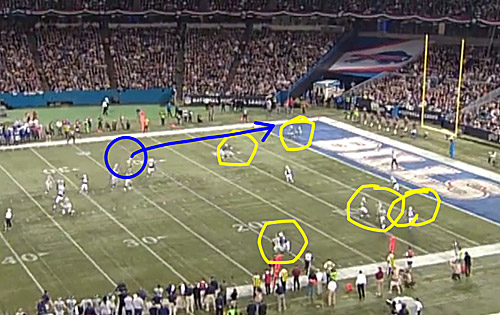 Anatomy of an 82-yard touchdown

I also mentioned Adrian Peterson's 82-yard touchdown run in After Further Review, highlighted because it was the perfect call against the defense called. The Rams had a blitz to the weak side of the formation. Safety Quintin Mikell (red circle) and linebacker Rocky McIntosh (blue circle) came on the blitz. The Vikings had a delayed run to Peterson to the right side.  Right guard Geoff Schwartz got a good block on Kendall Langford, who was dropping into a zone-blitz look and Phil Loadholt got a great kick-out block on Chris Long. Fullback Jerome Felton took on James Laurinatis in the hole, and off Peterson went. 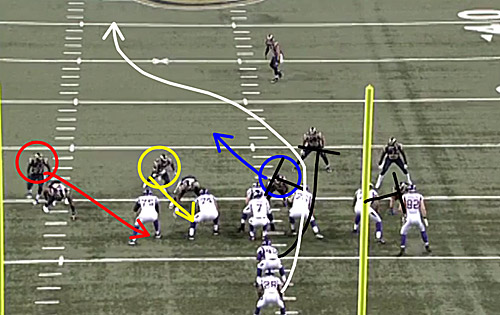 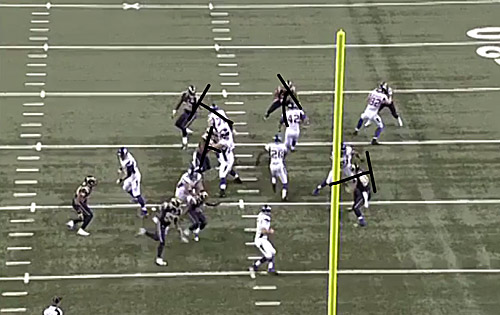