For those who don't know there's baseball beyond the Subway Series, the West Coast gave us all the excitement we could handle, with a no-hitter, a walk-off and a streak buster. Saturday has an intriguing pitching matchup in Arizona and Justin Verlander vs. Joey Votto. 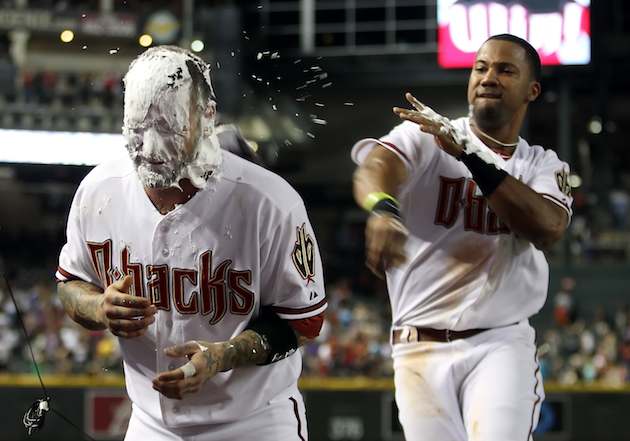 If you went to bed early on Friday, you missed out on all the excitement -- but 3 Up highlights what you missed.

Full Friday scoreboard with recaps and box scores for every game

Ryan Roberts, Diamondbacks: The Diamondbacks made dramatic comebacks routine last season, but have had a little trouble recreating that magic in 2012. But Friday night Roberts reminded everyone of his postseason heroics from last season, hitting a two-out, three-run, walk-off home run off of Oakland's Brian Fuentes to give Arizona a 9-8 victory. The Diamondbacks trailed by six runs in the second and by four as late as the sixth inning before mounting their comeback.

Jesus Montero, Mariners: With six pitchers combining for a no-hitter in Seattle, there was only one Mariner involved with every pitch thrown by Kevin Millwood, Charlie Furbush, Stephen Pryor, Lucas Luetge, Brandon League and Tom Wilhelmsen -- Montero. The rookie catcher had just one hit, but he was central to the team's effort on Friday.

Matt Harrison, Rangers: The lefty threw his third career shutout and gave the Rangers their first victory at AT&T Park in 11 tries. Texas entered Friday's game 0-9 in the regular season and lost both games held at AT&T Park in the 2010 World Series. The Rangers hadn't won in San Francisco since 1998 when Darren Oliver beat Orel Hershiser at Candlestick Park. Harrison gave up just five hits -- all singles, four of them of the infield variety -- and no walks, while striking out four. Giants starter Barry Zito was the only Giant to reach second, and he was tagged out after running past the bag.

Blue Jays: It's tough to pick just one -- of the Braves four runs in a 4-3 victory in 10 innings, three were gifts from Toronto. Starter Kyle Drabek walked in Atlanta's first run in the fourth, reliever Chad Beck balked in a run in the sixth and Jason Heyward scored the winning run on catcher J.P. Arencibia's throwing error. All-around, a rough night for the Jays.

Cubs bullepn: Randy Wells, James Russell and Shawn Camp each gave up tying or go-ahead runs as the Cubs lost 8-7 in 10 innings to the Twins. Cubs starter Travis Wood left the game with a 5-3 lead after five innings. Chicago has lost 19 of its last 23 and Friday marked the 12th straight one-run decision the team has dropped, besting (or worsting?) the franchise record of 11, set in 1915.

Jake Arrieta, Orioles: The Orioles' opening-day starter may find himself in Triple-A as soon as Saturday following Friday's implosion. The 26-year-old right-hander told reporters he felt "lost" after giving up nine runs on 11 hits in four innings to the Phillies. Arrieta has lost his last six decisions and is 0-6 with a 9.34 ERA in his past seven starts. He's allowed four or more runs in 10 of his 13 starts this season and has an ERA of 11.09 over his last four starts. Tommy Hunter is expected to be called up in time for Saturday's start and Baltimore will need to make a move to open up a spot on the 25-man roster.

• Matsuzaka returns: One day from the anniversary of his Tommy John surgery, the Red Sox right-hander will make his return to the big-league mound. Matsuzaka made eight minor-league rehab starts, going 0-3 with a 3.65 ERA. He'll pitch opposite the Nationals' Gio Gonzalez, who is 7-2 with a 2.31 ERA. 4:05 p.m. ET

• Verlander's called shot? Earlier this week Justin Verlander talked about his desire to record his first career hit -- and intimated that he believed he could hit one out of Cincinnati's Great American Ball Park. And that was before he saw he was going to match up with Bronson Arroyo, who gave up 46 home runs last season and nine this season. There's also the showdown between Verlander and Joey Votto. The two have never faced each other. Left-handed hitters are hitting just .204/.251/.321 with two homers against Verlander, while Votto's pounding right-handers to a tune of .385/.500/.708 with eight of his 10 homers coming off right-handers. 4:10 p.m.

• This is … awkward … meeting you here: One of the biggest trades of this offseason was the A's sending Trevor Cahill to Arizona for Diamondbacks prospect Jarrod Parker. There's always analysis about which team "won" a trade that is mostly hypothetical. Not as much this time -- even if it'll be just one game, not the long-term view that's usually talked about when discussing "winners" and "losers" of a trade -- as Cahill and Parker will face off at Chase Field. Cahill has been OK, going 3-4 with a 3.45 ERA, while the younger Parker has lived up to billing, going 2-2 with a 2.40 ERA. 10:10 p.m. ET

• Mr. Specs: No, Mike Owens doesn't have that name because he wears glasses (although, with no picture, I don't know if he does or not), but because he checks the specs on all 30 ballparks, making sure all the measurements are up to code. [MLB.com]

• Unsafe at any volume: Consumer advocate Ralph Nader has contacted Yankee executives over in-game ads that he says "disrupt the flow and excitement of the game broadcast and undermine your responsibilities as a guardian of the national pastime." [New York Times]

• Ozzie's chipping in: Marlins manager Ozzie Guillen said the Rays "deserve" a new ballpark. He asks "why not?" -- so he obviously hasn't noticed the fact that we're in a recession and public money spent on sports stadiums rarely make economic sense. But other than that, yeah, it's a great idea. Anyway, Gullen, a former Ray, said he'd "put in a couple million." [Tampa Bay Times]

• Is that all Yu got? Has the league figured out Yu Darvish? Have we tired of Yu puns? [FanGraphs]

• Second career options: Kent Hrbek has turned to dog treat tasting. I'm not judging, we all have to make a living. [Big League Stew]