The Lineup: Sergio Santos gets his first save

After blowing saves in his first two chances, new Blue Jays closer Sergio Santos finally nailed down his first save in Toronto. On Thursday, Gio Gonzalez will make his first start at Nationals Park. 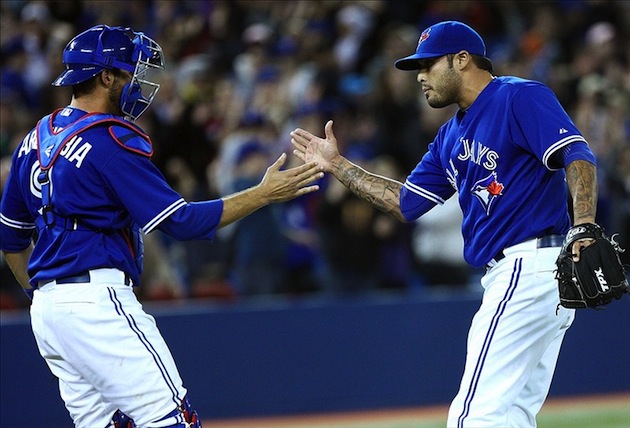 With the Twins' victory over the Angels and the Diamondbacks' loss to the Padres, there are no more winless or undefeated teams in baseball.

Sergio Santos, Blue Jays. While plenty of people in Toronto were calling for Santos' job following blown saves in his first two chances -- and he was probably looking over his shoulder at Francisco Cordero and his 327 career saves -- he got it done on Wednesday. After Toronto starter Ricky Romero walked two batters in the ninth, Santos came in with one out and runners on second and third and struck out Kevin Youkilis and got David Ortiz to ground out to earn his first save with the Blue Jays.

Chris Heisey, Reds. Opposing manager may want to see Heisey in the starting lineup, because if you see him late, you could be in trouble. Heisey's pinch-hit single in the ninth inning on Wednesday scored Joey Votto from second and gave the Reds a 4-3 victory over the Cardinals. The 27-year-old now has 67 plate appearances as a pinch hitter in his career and is hitting .356/.403/.729 with six homers and 20 RBI. This season he's 2-for-2 with RBI in each of his pinch-hit opportunities.

Ike Davis, Mets. Johan Santana got plenty of help from his first baseman in the fifth inning, as Davis made two catches of foul balls that ventured outside of the playing field -- first over the railing by the camera well, the second, for the third out, into the stands in shallow right. Two years ago Davis made a name for himself by flipping over the railing for a catch twice -- he didn't need to flip this time, but still made the catches.

Brett Pill, Giants. There's plenty of blame to go around for the debacle in Denver -- but Pill has as ugly a play as you'll ever see on a baseball field in the Rockies' seven-run fifth. With two on and Colorado leading 12-7, Ramon Hernandez hit a single to center. Center fielder Angel Pagan fielded the ball and threw home, but Pill, the cutoff man as a first baseman, had the ball bounce off his glove, allowing Hernandez to get to second. The Giants then got Michael Cuddyer hung up in a rundown, and again, Pill had a throw bounce off his glove, allowing Cuddyer to score. Hernandez then advanced to third on a nifty slide. Giants third baseman Pablo Sandoval held onto the ball too long before throwing to Pill, but he still should have caught the ball. He was charged with two errors on the play.

Jonathan Broxton, Royals. Broxton became the first pitcher since Sept. 2, 1966 to end a game by hitting two batters in a row. Broxton wasn't helped by Alcedes Escobar's one-out error, but he followed that with two walks -- and it got worse from there, when Coco Crisp grounded out to drive in the tying run and then he hit Yoenis Cespedes and Jonny Gomes with his next two pitches, scoring the winning run. With Greg Holland waiting in the wings, it'll be interesting to see how long Broxton holds on to the closer's spot.

Astros defense. Poor Wandy Rodriguez. In each of his two starts so far this season, his teammates have committed three errors, while he's committed one in each of his starts to boot. All eight of the Astros' errors this season have been in Rodriguez's starts. Rodriguez and shortstop Marwin Gonzalez had errors in the Braves' three-run fourth

• Rubber match: The Rays and Tigers have split their first two games of a possible ALCS preview, with the rubber match coming Thursday with both team's fifth starters making their season debuts. Tampa Bay will send right-hander Jeff Niemann, who won a fierce spring battle for the team's fifth starter spot, while lefty Drew Smyly will be making his big-league debut. 1:05 p.m. ET

• Nats home opener: Gio Gonzalez pitch in the Nationals' home-opener against Mat Latos. Both were part of big offseason trades and struggled in their debuts. Gonzalez lasted just 3 2/3 innings in his first National League start, Saturday at Chicago. In his Cincinnati debut, Latos lasted a an inning longer than Gonzalez but also allowed four runs on seven hits. Both have the ability to shutdown an opposing lineup and will hope for better outings today. 1:05 p.m. ET

• Berkman on the mend: One of the concerns about the Cardinals this season is their age and the possible health of key players. As great as the team has started off, Lance Berkman has already been sidelined with a muscle strain in his left leg. He said Wednesday that he's "doubtful" for the team's first series at Busch Stadium. [St. Louis Post-Dispatch]

• Shipping up to Philly: The Dropkick Murphys said they didn't want Jonathan Papelbon to come out to "Shipping Up To Boston" now that he's a Philly, so Papelbon had to go searching for a new entrance song. Monday Papelbon came out for his first save at Citizen's Bank Park and over the loudspeaker was Alice in Chains' "Man in the Box." While it seems odd for a pitcher to have a theme song about being in the box, since the batter is actually the man in the box, it does have the line, "Won't you come and save me." [NJ.com]

• Framed: They study everything nowadays, including catchers' ability to frame pitches. J.C. Arencibia apparently worked on it this past offseason and has improved so far this season. [Mop-Up Duty]

• Do you like me? Check yes or no: Are the Nationals the "least liked" team in baseball? One look at their Facebook likes, as well as another looking at the Twitter numbers, say so. [Washington Post]

• Batman banned: The guy who ran onto the field at the Orioles' home-opener last week wearing a cape and Batman underwear has been banned from Camden Yards for life. CBS in Baltimore has tracked down the unmasked man.