With some help from hitting coach Kevin Long, Mets second baseman Daniel Murphy has a more aggressive approach and is hitting more home runs than ever before.

NEW YORK -- Every postseason it seems one player emerges, stands out from the rest of the pack, and really makes a name for himself on a national stage. This October that player is Daniel Murphy, the Mets second baseman who's hit four home runs in six postseason games. Three of the four have given the Mets the lead.

Murphy has been a solid hitter throughout his career -- he owns a career .288/.331/.424 (110 OPS+) batting line -- but he's never been a big power hitter. His 14 home runs this season were a career high and only three times in his six full seasons has he hit double-digit homers.

Between the regular season and the postseason, Murphy has now hit eight home runs in his last 22 games, and perhaps that shouldn't be so surprising. This season the Mets hired hitting coach Kevin Long after he was cut loose by the Yankees, and Long has a history of helping left-handed hitters hit for power.

Under Long's watch in the Bronx, Curtis Granderson went from a 25-homer guy to a 40-homer guy. Robinson Cano made the jump from 15-20 homers to a 30-homer threat as well. It would be easy to write that off as a result of Yankee Stadium's short porch, but that's sort of the point. Long helped those players take advantage of the short porch.

Citi Field doesn't have a short right field porch, not even close, but pulling the ball is still the best way to hit for power, and that's what Murphy has done in the postseason. All four home runs have been pulled to right field. He's hit them off brand names too: Clayton Kershaw (two), Zack Greinke and Jon Lester.

"I started getting a little more aggressive," said Murphy when asked about his postseason power surge Saturday. "So we kind of talked and found out what are my strengths, what are my weaknesses? And (Long) really helped me to play as much as I could to one of my biggest strengths, I think, which is I don't swing and miss a lot. So if I can get a good pitch to hit, there is a good chance I should be able to hit it hard."

Murphy had baseball's lowest strikeout rate this season at 7.1 percent this season, but contact by itself doesn't lead to home runs. It has to be hard contact. Hard contact and in the air. Here the strike zone plot of Murphy's isolated power -- isolated power is slugging percentage minus batting average, so it tells you extra-bases per at-bat -- from 2012-14, courtesy of FanGraphs: 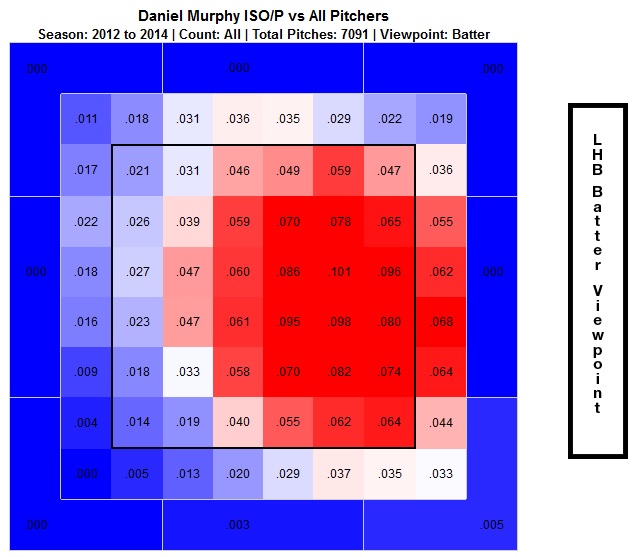 In a nutshell, the brighter the red, the more damage Murphy did on pitches in that location. The brighter the blue, the less damage. So, based on that, almost all of Murphy's power from 2012-14 come from middle-in pitches. The pitches he could yank to the pull field.

Keep in mind the league average ISO from 2012-14 was approximately .140, so even though Murphy did most of his damage against those inside pitches, he was still hitting for power at a below-average clip. Only one little red square in that strike zone plot has an ISO over .100, and that's at .101. Murphy was a below-average power hitter, but, relatively speaking, he hit for the most power on inside pitches. 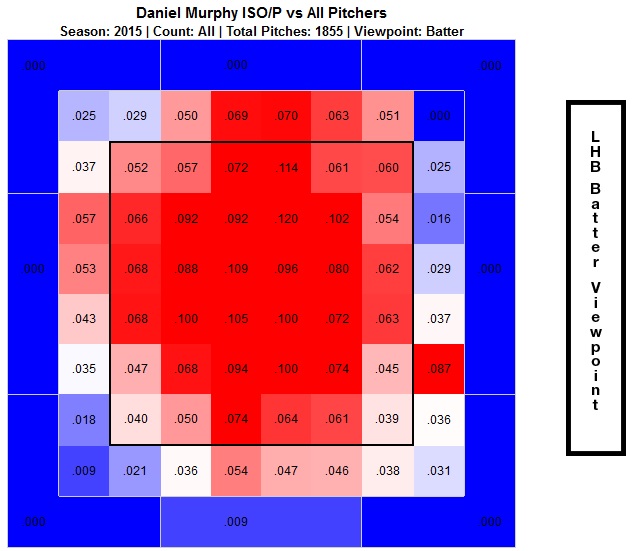 Look at all that red! Murphy is not necessarily doing a better job covering the entire plate -- he's always covered the plate well, you don't post a strikeout rate that low without great plate coverage -- rather he's doing a better job of hitting for power against pitches in all locations, not just on the inner half.

Murphy said Saturday he "really started hunting pitches in the middle of the plate" and it shows in the strike zone plot. His swing rate on pitches in the middle third of the plate rose from roughly 65 percent from 2012-14 to approximately 70 percent from 2015. That doesn't sound like much of a difference, but we are talking about the most hittable pitches, so that little bit can go a long way.

Dating back to his time with the Yankees, Long has a history of helping left-handed batters hit for power. It was a little easier to see the results in Yankee Stadium, but Murphy's career-high home run total in 2015 and his postseason power surge is evidence Long is again working his magic. (More evident: Granderson's rebound and Lucas Duda's improvement against lefties.)

"I've said it before that if I knew what I was doing, I would have hit more homers during the regular season," joked Murphy after Game 1. Now, thanks to Long, it seems like Murphy really knows what he's doing, and the result is more power.