The five dumbest things about the White Sox-LaRoche saga

So the twists and turns of the Adam LaRoche saga from last week with the White Sox were pretty dumb, right? Here are the five dumbest.

If any of you baseball fans haven't heard about the Adam LaRoche situation with the White Sox yet, let me welcome you back from a five-day break from the Internet! To catch you up, LaRoche retired due to a dispute with the White Sox over having his son in the clubhouse essentially as a member of the team. Turns out, he was there "100 percent" of the time according to team president Kenny Williams. Drake LaRoche even had a locker, his own uniform and got a picture with his Dad when every other player just gets his own. 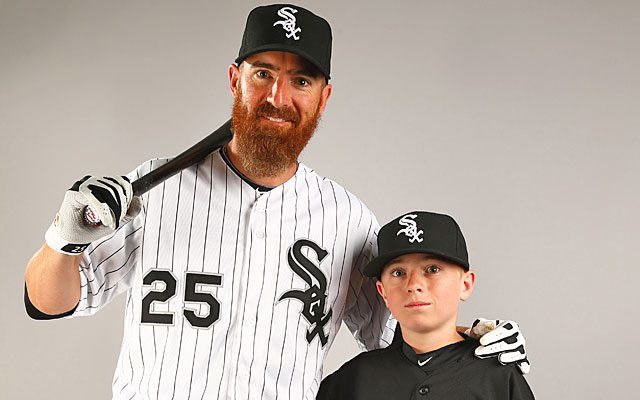 Since then, there's been a firestorm of fallout. It dominated discussions in the baseball world for a few days and it's likely to die after Sunday's statement from White Sox chairman Jerry Reinsdorf.

You know what else we've gotten a lot of? Dumb. Let us count the top five ways.

5. "If he hit better than .207, this wouldn't have been an issue!" First of all, we don't know that this is true. Reports late last week indicate some players complained about the excessive nature of Drake's being with the club (via usatoday.com) and it's possible those same complaints are made about a very good player.

Secondly, c'mon guys. Of course performance matters. This is a performance-based society and obviously superstar players get more privileges than also-rans. Don't the top salespeople in any sales company have more leeway than those who aren't hitting their marks? That's life.

4. The suggestion that this somehow makes Adam LaRoche a better Father than "ordinary" folks. Oh my gosh, he left $13 million on the table to go spend more time with his family!

That's an ... interesting ... spin. I mean, he did, but he already had made over $70 million in his career, was coming off an awful year, this was likely to be his last in the bigs and he was dealing with a back injury.

Plus, this wasn't just a matter of a guy taking a stand on principle to have the same rights as everyone else. LaRoche was raising his child in the clubhouse. Anyone ever been in a Major League Baseball clubhouse? Whatever you can imagine, that's probably about correct. It's no place for a child.

Remember, LaRoche was choosing the clubhouse on a daily basis over school for his son. From a 2013 Washington Post article:

He and Drake play baseball in the morning. If he’s not playing in the game, they either go fishing or play golf. At night, they play Ping-Pong at their rental home.

“We’re not big on school,” LaRoche said. “I told my wife, ‘He’s going to learn a lot more useful information in the clubhouse than he will in the classroom, as far as life lessons.’ ”

That will be true if Drake LaRoche plays in the majors for a long time. If not, well, I'm gonna have to disagree. Take note of the perspective offered up by the wife of former big-leaguer Joe Randa. 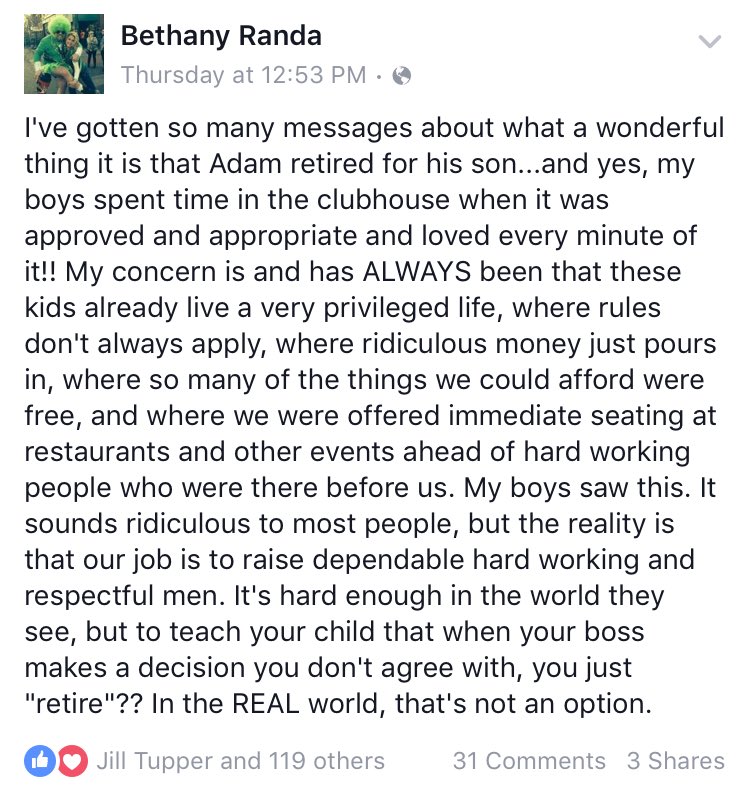 So I ask you, what if Drake LaRoche isn't good enough to make the majors? Is Adam gonna sit in his office cubicle with him?

Now, it's possible the White Sox (and Nationals before that) made accomodations, but wouldn't that be why there were likely complaints? It's hard enough to be a Major League Baseball player on a daily basis, now you have to worry about someone else's kid being there nearly 100 percent of the time?

There's also this aspect: I love my family more than anything, but the thought of any of one of them being with me at work 100 percent of the time is a bit much -- especially at the expense of my kids being in school and getting socialized. And I'd feel awful if I subjected every co-worker to my son everyday. He's my son, not theirs. You ever heard or said the phrase "when it's your kid, it's different?" It is.

Let's be clear about something: In no way am I saying LaRoche is a bad father. Far from it. He's around for his son and that's something many fathers can't say. Many refuse to even try. He has a great relationship and that's commendable.

I just don't think he should be put on some kind of pedestal here as history's greatest father.

3. The utter lack of perspective from Chris Sale. After the White Sox reportedly "almost" boycotted a spring training game, reports surfaced that Sale -- one of the Sox's top two players -- screamed at Williams. He reportedly told Williams to stay out of the clubhouse because that's the players' domain.

Um, Chris, Williams is the club president. He's your boss. He can make clubhouse rules if he wants. Here's Yankees boss Brian Cashman on the matter, via Newsday:

Now, circle back to my comments about star treatment above. Sale can get away with screaming at his boss because he's a superstar. I'm also not going to do that "just imagine if you screamed at your boss" thing because MLB is different. These facts do not mean that Sale is right, though. Far from it. He's totally misguided here. Williams had a situation where there were complaints and he, as the boss, addressed it. He obviously did a terrible job in communicating the situation properly (we're getting to that), but Sale's reaction was over the top. Especially given this:

Yes, Jose Abreu hadn't seen his son in three years. That's an extreme example, sure, so let's check in on Alexei Ramirez -- who has five kids -- from last season's story in the Chicago Tribune:

"It's very difficult because I am missing the time when they are growing up," Ramirez said through an interpreter. "But I always try to talk with them every day, and I try to explain to them that what we're doing is for them, and for their future. Some of the older ones understand the situation, but it's difficult for me because I am here alone and for them because they aren't with me."

And there are players kicking and screaming that LaRoche might have had to take a few hours' break? Good lord, guys. Perspective. Please.

Let's also take note that while there were a few vocal past and present teammates getting LaRoche's back, it wasn't dozens or anything. No player is going to speak out and say he complained -- that's a P.R. disaster -- but the silence from others is probably worth a few words, no?

I am sure the White Sox fans who pay their hard-earned money to support the team were pretty excited about all the pettiness, though. Right?

2. How Williams handled it. Judging from the comments of a few players and coaches, it sounds like Williams told different stories to different parties. Reinsdorf said "much of this was a result of miscommunication and misunderstanding rather than this being a case of anyone not telling the truth." Some players say they were lied to. Regardless of if Williams lied or not, it's rather obvious he did a terrible job here. He's the boss -- after Reinsdorf -- yes, but he should have done better.

Yes, a 14-year-old boy is a leader for a Major League Baseball team. Laughable.

Hey, Matt, maybe Eaton just felt bad for Drake and wanted to stand up for him.

OK. Cool. It's still the dumbest single thing said throughout this entire saga. Again, let's have a little perspective, for the love of all that is holy. I'm also not sure a single person -- at least one with a brain -- said anything bad about Drake.

The good news is Sale already said the team is ready to move on and the season starts in a few weeks. So this will be well in the rearview by then. Plus, LaRoche's $13 million albatross of a contract is off the books!

Fan who caught Judge's 62nd HR isn't sure what he'll do

Braves put down first sac bunt of the season