One of the NHL's top rookies has been suspended for one game for instigating a late fight on Thursday night.

When it comes to his style of play, it is pretty safe to say that Arizona Coyotes rookie Max Domi does not follow in the footsteps of his father, former Toronto Maple Leafs tough-guy Tie Domi. Instead of fighting and causing chaos physically, Max is more of an offensively gifted player that is out there to put points on the board, and so far he has proven to be quite good at it. Having said that, he showed on Thursday night against the Anaheim Ducks that he does have a little bit of a mean streak to his game as well.

Late in the Coyotes' 5-1 loss to the Ducks, and not long after Anaheim's Nick Ritchie and Arizona's Jarred Tinordi exhanged punches, Domi chased Ryan Garbutt down from behind and instigated a fight with him following a hit on Domi's teammate, Oliver Ekman-Larsson.

Along with the five-minute major for fighting, Domi also earned an institagor penalty and a game misconduct for instigating a fight in the final five minutes of a game. That instigator penalty can also carry an automatic one-game suspension unless the league decides to rescind it. In this case, the NHL did not rescind it.

The NHL's department of player safety announced on Friday afternoon that Domi will sit out one game for his actions.

Arizona's Max Domi has been automatically suspended one game for instigating an altercation in the final five minutes of regulation time.

He will miss Arizona's game on Saturday night against the Florida Panthers.

Here is the rule that forced Domi to miss the game.

46.22 -- A player who is determined to be the instigator of an altercation in the final five minutes of regulation time or at anytime in overtime shall be suspended fo rone game, pending a review of the incident.

When the one-game suspension is imposed, the coach shall fined $10,000, a fine that will double for each subsequent incident.

The suspension shall be served unless, upon review of the incident, the Director of Hockey Operations, at his discretion, deems the incident is not related to the score, previous incidents in the game or prior games, retaliatory in nature, "message sending," etc. The length of suspension shall be served in addition to any other automatic suspensions a player may incur for accumulation of three or more instigator penalties.

No team appeals will be permitted either verbally or in writing regarding the assessment of this automatic suspension as all incidents are reviewed by the Director of Hockey Operations as outlined above.

His fight with Garbutt on Thursday was only his second fight of the season. 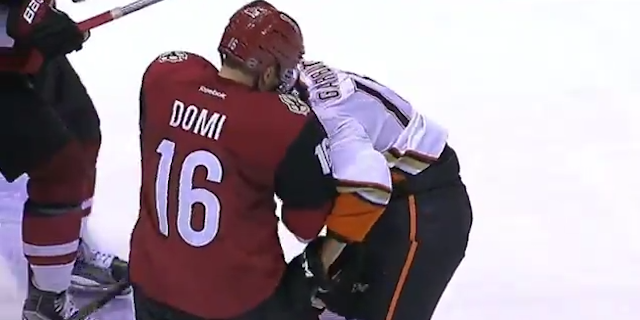 Christoff's Miracle on Ice gold medal up for auction