A Texas lawmaker has filed a bill that would require the Longhorns and Aggies to play each year.

College football knows no boundaries when it comes to our daily lives. We have seen the sport invade lands governed by both church and state, and on Monday at least one member of the Texas House of Representatives took action to try to renew one of the oldest rivalries in the Lone Star State.

Ryan Guillen, a Democrat from House District 31, filed a bill Monday that would require the University of Texas and Texas A&M University to compete annually in football, which would renew a rivalry that dates to 1894.

"This game is as much a Texas tradition as cowboy boots and barbeque," Guillen, an A&M graduate, said in a prepared statement to ESPN. "The purpose of the bill is to put the 'eyes of Texas upon' our two greatest universities to restore this sacred Texas tradition." 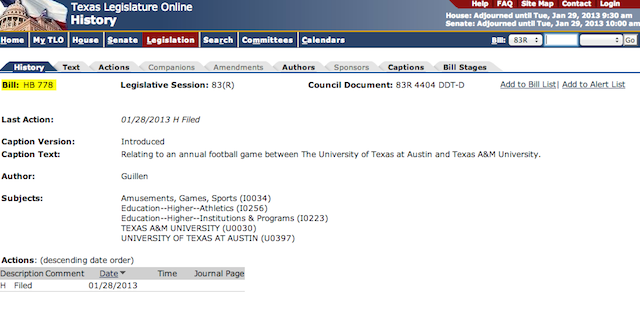 Realistically, we realize that there is little chance this proposed bill will take precedent over whatever plans are being devised in Austin and College Station.

But it is an entertaining gesture nonetheless. State legislatures have played roles in collegiate in-state rivalries in the past (Auburn-Alabama, Florida-Florida State, to name a few), but that was before conference realignment, the Longhorn Network and the Aggies' move to the SEC.