Brett Lawrie flips out on ump

Brett Lawrie of the Blue Jays might have earned himself a fine and suspension when he was a bit aggressive in objecting to a called third strike on Tuesday.

On Tuesday, Toronto's Brett Lawrie struck out looking in the ninth with his team down by one run to the Rays. As you shall soon see, Mr. Lawrie objected rather strongly home-plate ump Bill Miller's shape-shifting strike zone. As you shall also soon see, Mr. Lawrie is probably headed for discplinary action -- the kind from which not even a "safe word" will spare you. As you also, also soon see, Jays manager John Farrell has a Mike Trout-like sprint time from dugout to home plate ...

MLB's disciplinarian, Joe Torre, told CBSSports.com Insider Danny Knobler that he's already seen the tape of Lawrie's freakout, but has yet to make a decision on what type of punishment will be handed down, although a suspension is likely.

Although MLB and Torre didn't like Lawrie's action, Torre told Knobler that he didn't feel that Lawrie hit Miller on purpose.

"The decision could have been better as the direction, but I don't believe he was trying to hit him," Torre said.

Lawrie apologized immediately after the game. From the Associated Press:

"That was not my intention at all," Lawrie said. "I've never, ever done anything to go at an umpire before in my life, and I didn't mean to tonight. I apologize for that.

"It's just my passion for the game," he said. "I wanted to help my teammates out as best I could. That's the pride I have in this game. I leave my emotions out on the field."

After the game, a fan threw a drink at Miller as he was walking off the field.

While Farrell didn't support Lawrie's actions, he said he understood why Lawrie was upset.

"The bat was taken completely out of Brett's hands, not only the 3-1 pitch but the 3-2 pitch as well," Farrell told the AP. "Those are not strikes."

While Farrell's right about the 3-1 pitch, the 3-2 pitch was a lot closer than it looked on TV. Here's the graph of the location of the pitches Lawrie saw in the game's final at-bat: 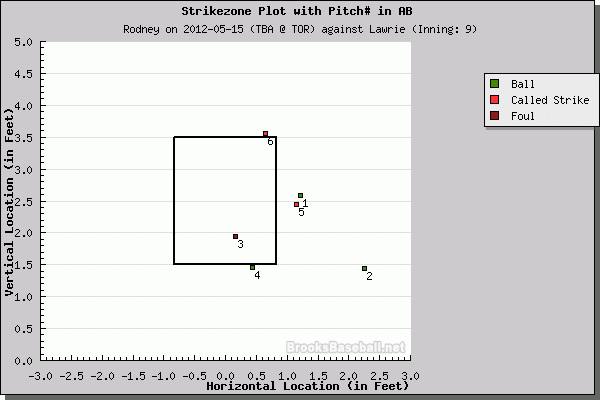 The third strike was high, but to say it was punishment for Lawrie's reaction to strike two may be a bit much. As for the 3-1, which was obviously outside, Miller consistently called the outside strike on Tuesday, as this graph shows (with the red markers indicating called strikes): 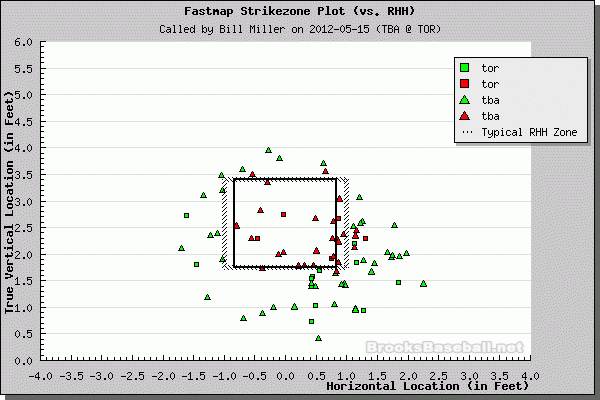 Hat-tip for the graphs to The Score's Getting Blanked.

Batting Around: Will A's, Rays relocate?