Report: Magic threatened to trade Dwight Howard to the Lakers

According to a report, the Magic had a deal in place with the Nets on March 14, but the Orlando front office busted out a power move and threatened to deal Howard to the Lakers. 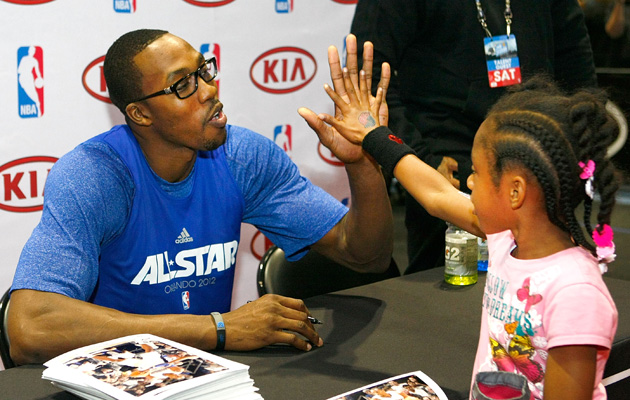 Howard flip-flopped his way around his early termination option, said he was "all in" for the season, changed his mind, changed it again and eventually settled on "loyalty" as he called it.

But maybe it wasn't that cut and dry. Via the NY Post, the Magic had a deal in place with the Nets on March 14, but the Orlando front office busted out a power move and threatened to deal Howard to the Lakers.

According to league sources who spoke on the condition of anonymity, Orlando brass got fed up with Howard’s yes-no-maybe posturing and threatened to trade him to the Lakers, not his desired location, if he did not sign an agreement to waive the opt-out clause for the final season of his contract. Howard eventually signed the papers, but only after he was told “he would be a Laker by the end of the day,” according to one source.

While both sides proclaimed loyalty as a factor in Howard’s decision to stay in Orlando, the contentious nature of the process gives the Nets ample hope they still may open in Brooklyn next season with Howard on their side.

“[The Magic] do not want to go through it all again,” said one source who claimed Orlando wants a commitment from Howard on an extension before training camp to avoid his bolting as a free agent in 2013. “[The Magic] are determined to avoid another year of that.”

The report says that Howard was adament for New Jersey prior to the deadline, but the Magic's trump card of using the Lakers scared him off. The deal was supposedly Andrew Bynum, Steve Blake and Devin Ebanks. Orlando preferred that to a reported offer of Brook Lopez, MarShon Brooks, Mehmet Okur and two first-round picks.

What was the problem with the Lakers? There have long been reports that Howard didn't want to follow the career path of Shaquille O'Neal, as well as murmurs that Kobe Bryant and Howard don't get along well. So Howard wanted the Nets, a team about to move into the brighter lights of Brooklyn.

And with the way things have gone down now, it's still a very good possibility. The Magic have to frustrated with this situation, have to be annoyed and have to be considering their options. They have a child in Dwight Howard -- a very large and gifted child -- and they have to figure out what to do with him.

Which opens up the theory that this asking to have Stan Van Gundy fired thing was a last ditch effort to force the Magic to throw up their hands. There was another report Thursday that some in the Orlando front office felt Howard was faking an injury or at least exaggerating it. Things are extremely contentious there and when the trade window opens again after the season, the Magic may want to just wash their hands clean of this and do what they almost did at the deadline -- trade Dwight Howard.

Kings' Fox 'not worried at all' about trade rumors