After giving up four home runs to the Blue Jays on Wednesday, Baltimore right-hander Jason Hammel said something was fishy in Toronto. 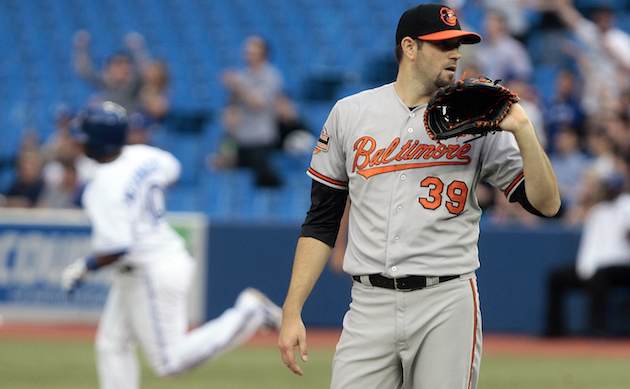 Your mom was right -- once you get a reputation, it can be tough to shake.

Last year the Blue Jays were accused of having a man in a white hat sitting in the outfield at Rogers Centre tipping pitches to Toronto batters. The Jays denied it, their fans mocked it. But there may be some believers out there -- including Orioles right-hander Jason Hammel.

After blaming himself for leaving the ball up, Hammel told reporters he suspected a little more than his own shortcomings. From the Baltimore Sun:

"When you're not locating your fastball, you're going to give up some home runs here, but the swings they were taking on the breaking stuff, it was pretty amazing to me," Hammel said. "I don't think you can take swings like that not knowing they're coming. I don't know. That's all I can say."

Hammel acknowledged he'd heard the rumors of the Jays stealing signs, both by ESPN the Magazine and by Yankees manager Joe Girardi.

"There's rumors and things like that," Hammel said (via the Sun). "I don't know. I can't speak on that, but they were taking very, very big, strong hacks on breaking stuff. It was something I've never seen before."

All four of the team's homers were on fastballs.