Remember When: Philly and Pittsburgh merged to form Steagles

During the 1943 season, with World War II overtaking everything in life, the Eagles and the Steelers merged to form one team. 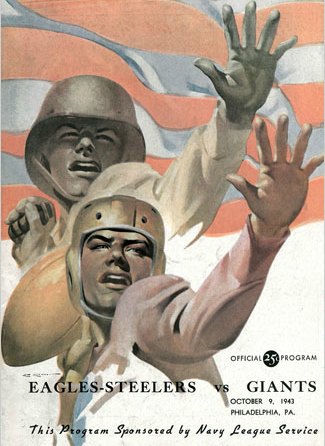 In the days of World War II when professional athletes by the droves signed up to serve their country, losing careers and (in some cases) their lives, the NFL decided to soldier on despite watching about 600 players sign up for the military.

Predictably, there was a dearth of top-notch players -- or, really, any kind of player -- who were available, so in one case in 1943, a compromise between two rivals had to be reached in order for passable professional football to be played.

Thus, we give you the Steagles.

Yes, in 1943, the Philadelphia Eagles and the Pittsburgh Steelers joined together (for the good of the country, people!), combined nicknames and uniform combinations, and embarked on a 10-game season in which they won five, lost four and tied one.

“They were not particularly successful teams, and they weren’t the richest teams,” said historian Ray Didinger in this Bleacher Report video. “The only way they could stay in business was to merge.”

Already, the Cleveland Rams had shut down their season, and the league executives didn’t want more cancelations. The Steelers only had six players and the Eagles fielded about 12, so the league suggested a merger.

“Had to do it,” Steelers co-owner Bert Bell said in 1943. “Pittsburgh had no backs left, and Philadelphia had no linemen.”

And the reason most of the players weren’t in the military was because either a) they had kids and families to support or b) the military deemed them physically unfit. That’s why the team’s leading receiver, Tony Bova (17 catches, 419 yards, five touchdowns) was blind in one eye and partially blind in the other -- according to the Last Team Standing book, Bova actually wore contacts for his eyes (at the time, contacts were made of hard plastic or glass). Other players were partially deaf, had flat feet or had developled ulcers.

The Steelers and Eagles had combined for a 13-65-7 record in the previous four seasons, so not much was expected of the two teams playing together. Suprisingly, though, they opened the season with a 17-0 victory against the Brooklyn Dodgers, followed that with a 28-14 win against the Giants and finished the season with a winning record.

Here’s how the NY Times saw that win vs. Brooklyn. 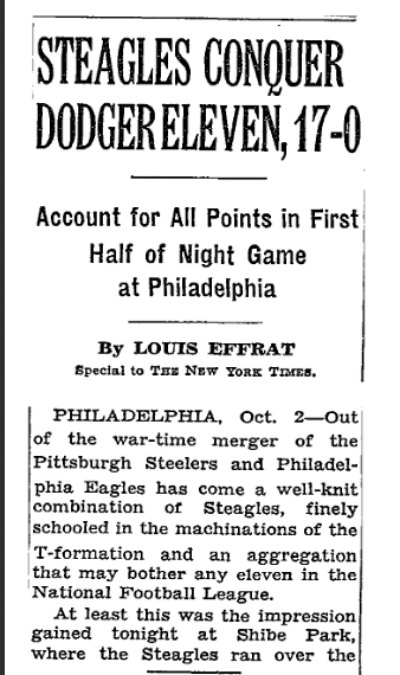 But because every eligible man in the country was expected to enlist and because Bill Hewitt -- a future Hall of Famer -- took so much guff for playing football that he retired midway through the season.

Hewitt, though, hadn’t played pro football since 1939, and he was 35 at the time. So, perhaps it wasn’t just the ridicule. Perhaps, in a league that wasn’t nearly as competitive as it was when Hewitt first played, he couldn’t hack it anymore.

“Bill was out of condition, and I felt so sorry for him,” said tackle Vic Sears in Last Team Standing. “It was terrible. It was not Bill’s fault … He spread something like Absorbine Jr., all over his body because it was aching so badly. And in order to get ready for a practice or a game, he’d cover himself with liniment.”

(As an aside, I interviewed a former University of Cincinnati football player for a book I wrote, and he told me how people would yell at him when he was walking down the street during WWII because he was in the States and not abroad fighting the Germans and Japenese. Thing is, this player who looked older than his years, was actually 17 and in high school at the time. If he could have, though, he would have enlisted right then and there.)

“Even the president gave us a vote of confidence,” Steagles center Ray Graves told the Times in 2009. “Told us we were out there entertaining the people and the families of the men in the service. It was tough, I’ll tell you.”

The next year, the Chicago Cardinals and the Steelers joined forces -- and went 0-10 for their troubles -- but by the 1945 season, the war was over and NFL life could return to normal.

Yet, it’s surprising that we don’t know more about this team. Before I decided to write this feature, I had never even heard of the Steagles.

“I grew up in Philadelphia and to me, it’s always been the answer to a trivia question,” Matthew Algeo, author of Last Team Standing, told the NY Times in 2009. “The NFL is funny that way; it’s like nothing existed before the Super Bowl. It’s a little surprising that it’s not better known.”

Wink of the CBS Eye to the Pro Football Hall of Fame, via the NY Times, for the above photo of the 1943 game program.

Chiefs vs. Bengals picks from expert who's 24-8

Latest on Dan Quinn's odds of staying in Dallas, more