Tom Brady was trying to impress someone when he jumped off that giant cliff on vacation.

Back in March, Tom Brady decided to jump off a cliff in Costa Rica for some reason, and now, we know what that reason was.

It turns out Brady was doing something that men have been trying to do for centuries: He was trying to impress a woman.

"My wife said, 'Are you gonna do it?' and I said, 'I think so," Brady told a convention crowd this week, via the Boston Herald. "Sometimes in life, impressing a girl is still one of the best things."

What's not one of the best things though is permanently injuring yourself in a horrible cliff-jumping accident -- and it seems that Brady was definitely aware of the fact that something could have gone wrong on his jump.

"I'll tell you, I was pretty scared," Brady said. 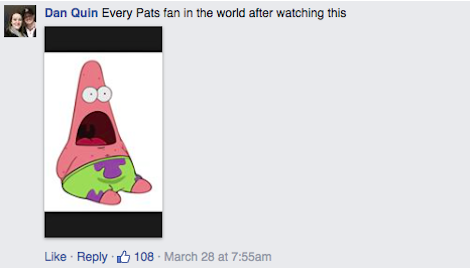 If you haven't seen Brady's jump, you can see it below (or by clicking here). And remember, if Tom Brady's willing to jump off a cliff for his wife, you should probably at least be willing to do the dishes when your wife asks this weekend.

Kenny Pickett on why he wears gloves on both hands

What's next in Watson case, plus ranking top 10 kickers