According to former Browns president Mike Holmgren, he offered to give up his 'whole draft' to Ryan Grigson in exchange for the rights to take Andrew Luck.

Man. That Trent Richardson trade really fired Mike Holmgren up. Because not only did he hop on the radio and lash at the Browns for dealing Richardson to Indianapolis but he also talked about his own potential trade with the Colts from 2012 and it was a doozy.

Or would've been a doozy anyway; Holmgren said that he offered his entire 2012 draft to Colts GM Ryan Grigson for the rights to the No. 1 overall pick and the chance to grab Andrew Luck.

"I talked to him last year [at the owner's meetings] before we made the trade,'' Holmgren said on Sports Radio KJR. "I said, 'I'll give you all of our draft picks for the No. 1 pick and I'll take Luck. I'll give the whole draft to you."

Desperation is a stinky cologne, eh? But at least Holmgren understood the talent available with the top pick and the inherent importance of grabbing a franchise quarterback (even if he appears to have forgotten about it now).

Not that it mattered because Grigson apparently "didn't take [Holmgren] seriously" when he offered that deal. Oh and P.S. Grigson would've taken Richardson if "some craziness would've happened."

"I said, 'Ryan let's do the deal, right now, right here.' He said, 'We're taking Luck.' We were by the pool, I might've even had a lemonade in my hand," Holmgren said. "He didn't take me seriously, because I was ready to pull the trigger. They were going to take him, and they should've taken him. They did the right thing, but he said if some craziness would've happened, they would've taken Trent Richardson. And now a year later, they get both of them.

"If you asked him last year, 'Would you trade your 24th pick in the first round for Trent Richardson,' you would do that easily."

Maybe Ryan Grigson would, and I suppose that Holmgren would as well. I'm not sure I would. 2013's draft class wasn't perfect but there was quality talent available at 24. Eddie Lacy and Giovani Bernard both went after that. You can simply get running backs later in the draft these days.

But back to the original deal which involved Holmgren's entire draft class. Grigson obviously would've gone in different directions on some of the players than Holmgren but the group of 11 players he pulled from the 2012 NFL Draft is incredibly unimpressive: 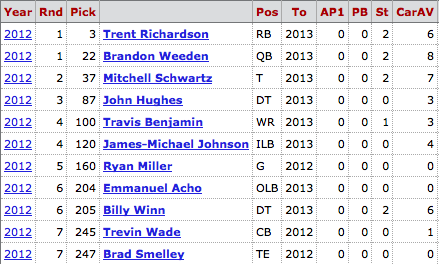 If you called the Colts and offered that group of players for Luck Grigson type "LOL" (505) on his keypad and hang up on you.

I'm pretty sure, actually, that the Raiders and Jaguars -- despite being only two games into the season and despite not knowing who is actually available -- wouldn't give up their first-round pick in 2014 for that group of players.

Tough for Chiefs to top win vs. Bills

What Reid said to Mahomes that will be in NFL lore

What we learned from NFL's divisional-round games