Jason Pierre-Paul was involved in a serious fireworks accident on Saturday.

Giants defensive end Jason Pierre-Paul suffered a serious hand injury in a fireworks accident on Saturday night near his home in South Florida, according to FoxSports.com.

Although the exact severity of the injury is unknown, ESPN.com has reported that Pierre-Paul suffered burns on his palm and three fingers. ESPN also added that at least one finger could have nerve damage.

WINZ-AM radio in Miami has reported that Pierre-Paul's injury is severe enough that there's still a small chance doctors may have to amputate his hand.

Jason Pierre-Paul update: As of 90 mins ago, he was still in hospital. Hand injury so severe, he could still possibly lose it.

There are also several other reports, including one from TMZ, indicating that Pierre-Paul injured at least two fingers plus his thumb.

There does appear to be some good news though: NFL.com has reported that JPP's hand is expected to remain intact and that there shouldn't be any "serious" long-term affects, although it's unknown at this point what the short-term ramifications are.

Pierre-Paul apparently bought so many fireworks over the weekend that he had to rent out a UHaul van to transport them. The tweet below came from one a neighbor who took a picture of Pierre-Paul's van. 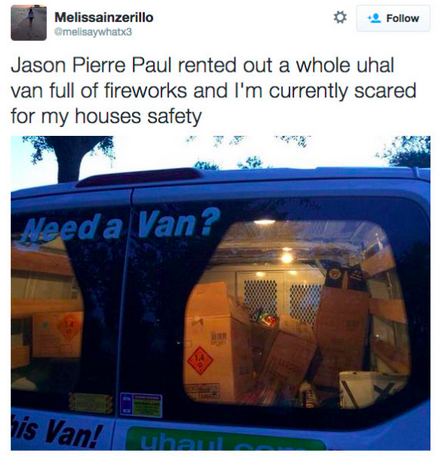 Pierre-Paul also posted a video to Instagram on Saturday that showed the same van in the background.

If the injury is as serious as it seems, Pierre-Paul could be out over $14 million.

The Giants hit JPP with the franchise tag in March, but Pierre-Paul had yet to sign the franchise tender, meaning the Giants could pull the offer. At that point the team would be under no obligation to pay Pierre-Paul the $14.8 million that he would have been owed had he signed.

If JPP had signed the tender, there's a chance he could've collected the money. The tender is only guaranteed for football injuries, but the Giants could've still paid him, if that's what they wanted to do.

Jar of sand from Brady's retirement up for auction